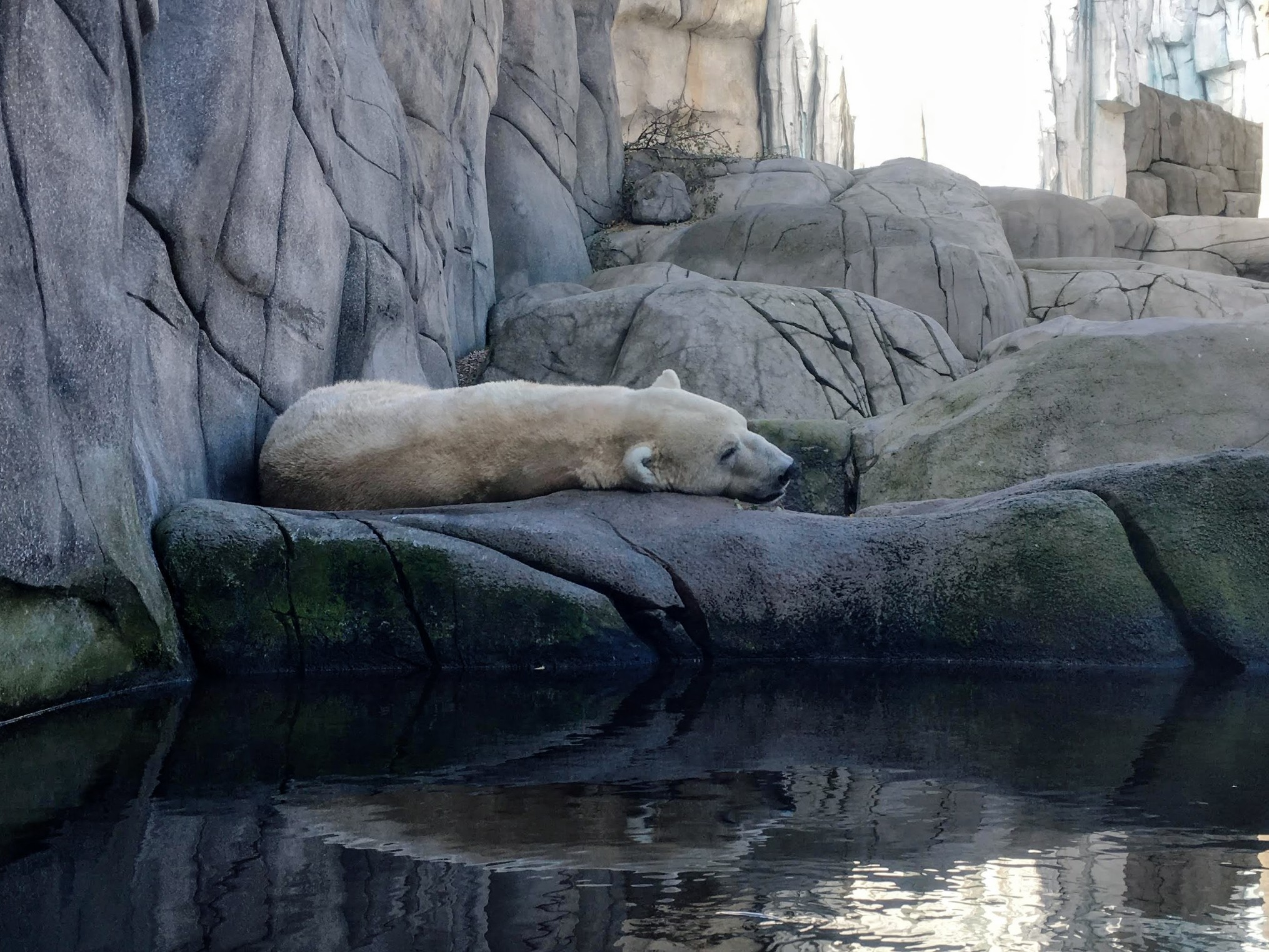 Tierpark Hagenbeck is a zoo in Hamburg, Germany. It’s notable for being the first zoo to use moats, rather than barred cages, for their animal enclosures.

It’s also known for being the filming location of my favorite German TV show, Leopard, Seebär und Co. I’ve been wanting to visit for a very long time. In fact, I’ve had tickets since May, since they were my birthday present. It took us all the way until October 20th to visit. Why? Well, in German culture, the person having the birthday does the planning; whereas, in America, it’s the other way around. I just assumed that someone else would pick the date. That (obviously) didn’t happen; and, since everyone else had their calendars filled up months ahead, by the time my husband reminded that me planning the trip was actually my job…everyone else already had plans for the next two months.

It all worked out for the best, though. Summer in Germany was a hellscape this year. Our trip to the Hannover Zoo was nice, but it was way too hot and you could tell the animals stuck outdoors felt the same way. October 20th in Tierpark Hagenbeck was cold, but it wasn’t unbearable; the animals still outside were very active.

I was excited to see the animals I might recognize from Leopard, Seebär und Co., and (perhaps) even more excited to see some of the caretakers from the show. I didn’t expect to see every single caretaker, but I did think I might glance one or two if I kept my eyes peeled. While I did recognize a few of the animals, I unfortunately didn’t see a single human from the show.

You can buy feed for some of the animals near the entrance. The elephant feed is (obviously) the most popular, so there wasn’t any left by the time we arrived. They still had feed for the alpacas, goats, and (I think?) some type of primate, but I can’t remember what type. I was a little surprised they didn’t have food for the giraffes, as it seems like that’s the in thing right now for every other zoo.

Anyway, you might think the monkey food is the obvious choice, but…you’d be wrong. Do you really think they’re going to let you hand a monkey some food? Maybe give it a few pats on the head? Hell no. You’re giving them the food through some kind of barrier.

Using my incredible powers of deduction when it comes to interacting with animals, I chose the alpaca feed. Why? Well, goats will (usually) let you pet them even if you don’t have food. Alpacas, on the other hand, are ungrateful. They will forget you gave them food the second it’s in their mouths. If you want to pet them, you need food as a distraction.

Like every zoo I’ve ever been to, Tierpark Hagenbeck has peacocks running around. Like many of the German zoos I’ve been to, they also have a bunch of free-roaming chickens and roosters. What makes this zoo unique (at least, to me) are the capybaras and Patagonian maras that also have free run of the zoo. For those who don’t know, a capybara is the largest rodent in the world. Meanwhile, the Patagonian mara looks like a rabbit bonked a kangaroo.

I was most excited to see the penguins, because they’re my favorite on the TV show. Or, more accurately, one of them is my favorite. Grobi waddled his way into my heart in this episode, in which his sass was set to maximum overdrive. Unfortunately, I didn’t think to check what color the band on his flipper is before we left. So, I have no idea if I actually saw him or not.

I did, however, see one of the poor penguins outside of the enclosure, with four or five other penguins looking down at him as he flapped at the window. When the caretaker eventually showed up, she just scooped him up and threw him back into the water.

A lack of supervision seemed to be a running theme in certain areas of Tierpark Hagenbeck. There were two employees watching the lemurs like hawks in a very tiny, easily-manageable space. Yet, in the alligator enclosure, no one was around to tell off the parents dangling their kids right above two alligators. I’ve seen the TV show enough times to know that they will go for anything that falls into their water. In one episode, they threw pieces of wood into the water, and the gators attacked them before they even knew what it was.

I also managed to get this nice shot of an African penguin with my phone’s camera, because another visitor had been reaching into the enclosure and luring it over by pretending she had food.

The elephant enclosure had a different layout than I had expected, based on my assumptions from watching Leopard, Seebär und Co. I didn’t realize there was such a large indoor viewing area. The baby elephant was running around the adults, being as cute as possible.

It was really cool to see Odin, Tierpark Hagenbeck’s huge, blind walrus. On Leopard, Seebär und Co., there’s an episode where they separate him from the other walruses, because there was a chance he might accidentally crush the babies because he can’t see them. In another episode, he rejoins the group. During our visit, he was separated from the females again. I didn’t see any babies, but perhaps they’ve recently had some? Anyway, the walruses are some of my favorite animals on the show, so I was happy to recognize Odin. Meanwhile, the other walruses were swimming in circles up to the window in the underground viewing area.

The orangutans were another highlight. On Leopard, Seebär und Co., they were trying to find a mate for Tuan, their male orangutan. According to the show, he wasn’t interested in any of the females in his enclosure. So, they purchased Conny, a deaf female orangutan from another zoo. They had this adorable segment where they showed Conny a video of Tuan, to see if she was interested in him. Long story short, things must have worked out, because there were baby orangutans!

We saw every animal in Tierpark Hagenbeck, other than the tapirs and giant otters. I was disappointed about the former, but definitely not the latter. Although I love all animals, there is something deeply unsettling to me about the way giant otters look and sound. Regular otters (which Tierpark Hagenbeck keeps with the orangutans) are amazing and adorable. Giant otters are nightmare fuel.

I’m so happy I was finally able to visit Tierpark Hagenbeck! It’s an excellent zoo and it’s always fun to visit something you’ve seen on TV. In terms of value, I think the Leipzig and Hannover zoos have Hagenbeck beat. However, the Leipzig Zoo’s TV show is boring as hell. Leopard, Seebär und Co. is where its at. Tierpark Hagenbeck has all the competition beat when it comes to the German public TV game.

Hopefully, we’ll make time to visit the Berlin Zoo in the near future. I also want to visit the Munich Zoo, though that might be a long time from now, as getting my husband to agree to a trip to Bavaria is like pulling teeth.