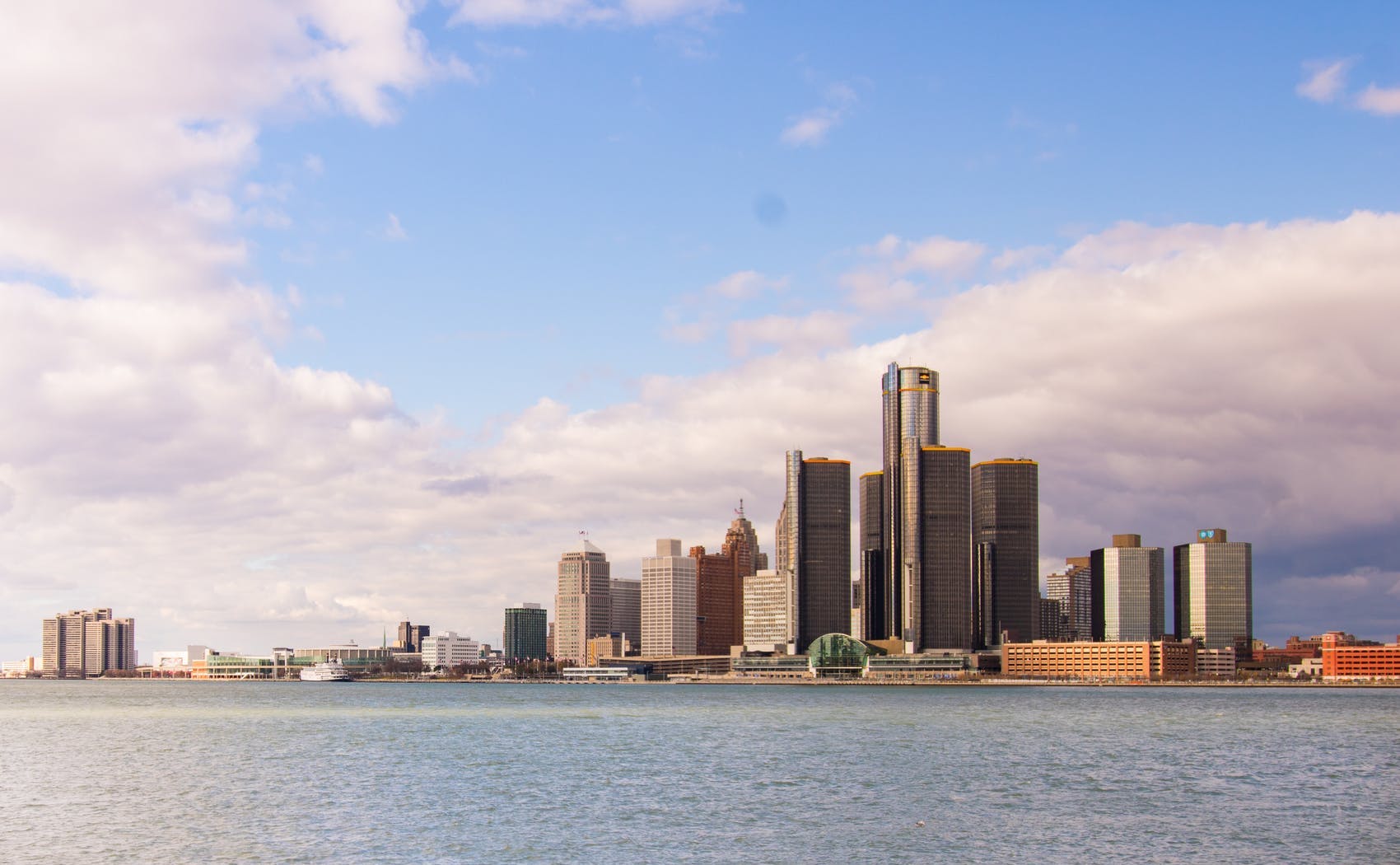 Reverse culture shock is the experience of returning to your home country after living abroad for years, and feeling as though you no longer belong.

In March, I finally went back to the USA to visit my family and friends. It had been over three years since the last time I’d been in America; so, needless to say, this trip was long overdue. And while I’m not so sure I believe in “reverse culture shock” (or that it could apply to my situation, even if it is real), I was “shocked” by a few things. Or, rather, how my memory of them was so wrong.

Walkability? Never Heard of Her

I grew up in a rural area and spent my teens in the suburbs. Neither place had sidewalks. I had to walk/cycle on the street in our neighborhood, and had to be driven everywhere else.

I didn’t live somewhere with sidewalks until I moved to the Detroit suburbs as an adult. It was liberating. Finally, I could walk to the grocery store, cafes, bars, etc. if I wanted!

After being spoiled by living in Germany, though, all I noticed on my last trip back to Michigan was how unwalkable the cities I had previously deemed walkable actually are. The sidewalks are torn-up and in disrepair; not great if you’re a wheelchair user. They often end for no reason. Drivers act like stopping at a crosswalk is merely a suggestion rather than the law. And you’re almost always walking next to 4+ lanes of traffic. It all comes together to make you feel like you’re doing something wrong for walking instead of driving.

In Germany, I cycle and take public transport everywhere. We do have an electric car, but I don’t drive and we only use it for long distances and big shopping trips.

In America, I had to be reliant on friends, family and Uber to get me everywhere. I do have a license, but there were no rental cars available. I already knew from my last visit to the US how terrible it is there for non-drivers, but not being able to rent a car this time made it even more apparent. I felt stuck everywhere I was, because public transport is a joke in Michigan and, well, let’s be real…almost everywhere else in America.

It also amazed me how adverse some of my friends and family were to walking. My brother is active military and super fit, but insisted on re-parking his car if we had to walk for more than five minutes; even when we visited Plymouth, which has a historical downtown area that’s far more walkable than any other place I’ve been in Michigan.

Why Are We Yelling?!

OK, Europeans. You’re right. Americans are loud. Not my friends and family, of course. They all know how to use their inside voices. Everyone else, though? Yikes.

Every restaurant I went to, people were yell-talking at each other. Some restaurants had garage door-style walls facing the street, which they open up in nice weather so that you can get a breeze…and, of course, the sound of the non-stop traffic.

All of my memories of getting brunch, lunch, second lunch, dinner, etc. are pleasant and at a reasonable volume, but it seems that was all a lie.

I think this was my biggest “reverse culture shock” of all, honestly; I had never noticed, until this trip, just how ear-splittingly loud Americans can get.

After being gone for so long, I 100% expected to have the smug American expat experience of finding American food repulsive. I was ready for my newly-refined palate to shine. Bring on the greasy, sugar-laden atrocities and I shall wrinkle my delicate nose and proclaim that food is sOoOoOo much better in Europe!

So, did it happen? Did I get diabetes and reverse culture shock?

Sorry, Helga, but desserts are meant to be sweet. And American cheesecake is far superior to German. Craft beer is more creative in America. American milk shakes are actually good and not just ice cream-flavored milk. There’s a huge variety of cuisines from around the world. And, unlike in Germany, our tomato salsa isn’t just pasta sauce.

I also want to be clear: American supermarkets have just as much fresh food as German. In fact, they generally have a bigger selection. It’s up to the shopper to decide what they buy.

That being said, I did gain 3 kg while in the US, but that was because I overate and barely got any exercise; not because the food is inherently unhealthy. I could have had a salad, but I chose violence mac n’ cheese.

Sometimes, it’s Nice to be Nice

Germans are not as unfriendly as every new person to the country makes them out to be. Sure, they’re direct and often give unsolicited opinions. And they sometimes stare. Overall, though, they’re human just like the rest of us (much to the disappointment of my German husband, who very much wishes he was a robot) and any German you actually get to know will be just as friendly and warm as anyone else.

I have to admit, though, it was nice being back in a place where even strangers are friendly towards each other. Germans aren’t any less civil in public than Americans; in fact, they’re probably more polite. It’s just that service workers aren’t going to smile or pretend to care about you, and strangers don’t talk to each other. For many, that’s just fine; maybe even preferred. And while I don’t like it when strangers try to start a long conversation with me, I do find that little interactions here and there make my day-to-day life more pleasant.

On my little neighbourhood walk today, a construction worker stopped me to recommend a donut place, “Randy’s! Google it!” And a lady complimented my dress as I walked by. This is basically free therapy after the grumpiness of Germany for 15 years

I’d forgotten what it was like being somewhere that friendliness is considered politeness, so, the first time an American asked me how I was doing, I was taken off guard. But, after a while, I started getting used to it again.

I appreciate that American strangers (OK, well…midwest strangers, at least) will try to help if they notice you’re struggling to find something in a shop. Or how some folks spark up a quick conversation if they like something you’re wearing or if you both notice something funny or strange. The way people actually say “sorry” when they bump into you. How most people don’t openly stare at strangers, but will usually smile if they make eye contact with you.

Politics as a Sport

After spending five years away, going back to the US and seeing political merchandise everywhere was…pretty strange. You see, in Germany, people are generally pretty quiet about their political beliefs. I’ve never seen anyone wearing a political party shirt, let alone one for a single candidate. (Most) Germans also don’t ruin their cars with bumper stickers or fill their lawn with political signs.

Politics are everywhere in the US and people get behind their “team” like its college football. I saw Pro-T*ump and anti-Biden signs on what seemed like every 6th lawn. And those awful thin blue line flags. The Democrats, meanwhile, had taken down their 2020 election signs from their yards, and replaced them with Black Lives Matter and pro-LGBTQ signs.

For better or worse, this isn’t really something you see in Germany. That isn’t to say people don’t express themselves politically in public, it’s just that it’s younger people who are far more likely to do so and they do it almost exclusively with graffiti and stickers. And definitely not for a particular political party, because that would be cringe.

I lied before. What I’m about to tell you now was actually my biggest reverse culture shock. Get ready, because it’s a doozy.

I went back to the US fully expecting to get to pet all the dogs. My memories of the US are filled with poorly-behaved dogs who happily jump on strangers, giving you the chance to get in a few quick pats before their owner apologizes and pulls them away. Or, if you’re lucky, apologizes and lets you keep petting them while you keep up the pretense of a casual conversation so you can get in even more pats.

This did not happen to me at all! Maybe it was the weather, but I barely saw any dogs this visit and those I did see were as well-behaved as their German-owned counterparts! Lame. I ask you: what is America coming to?