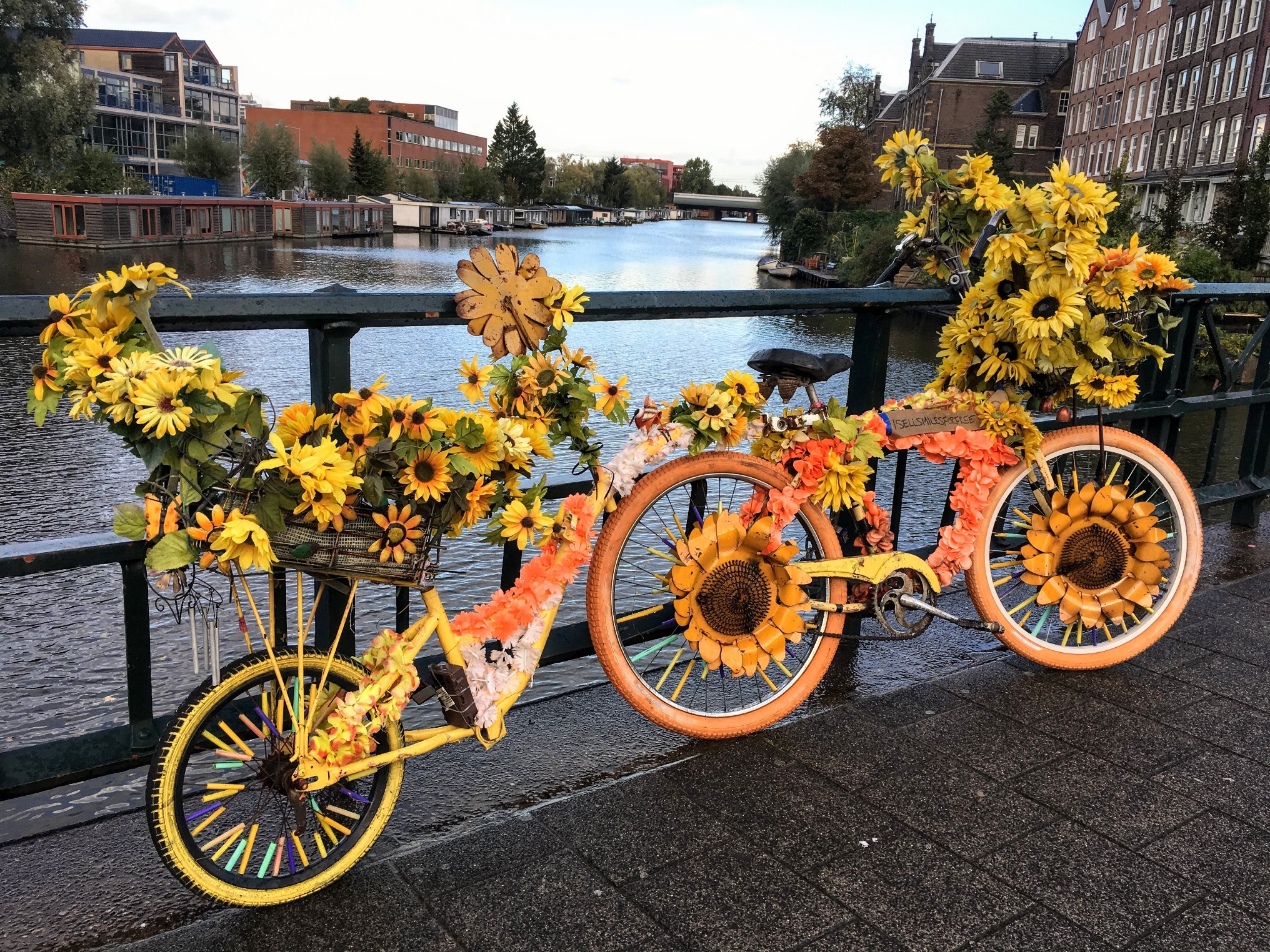 Amsterdam: a city best-known for legal prostitution and pot. As a potential visitor, you might find yourself wondering: IS there much to do if I’m not part of a British stag party?

As it turns out, yes! There’s so more to this legendary city than just the red light district. There are great restaurants, amazing breweries, beautiful parks, unique shops, and excellent coffee shops with actual coffee.

Here are the best things we did on our 2-and-a-half-day Amsterdam trip, and my suggestions to make your visit even better.

We chose the Hotel Levell because it was (comparatively) cheaper than other places. It’s also a mere 3-minute walk from the nearest metro station. Our room was clean and modern, the bathroom was really nice, and we didn’t hear our neighbors. Checking in and out was also easy. The only downside to this hotel is that the breakfast isn’t included, and it’s really pricey at 12€ per person, per day. No breakfast buffet is worth that much, in my opinion.

It’s only a slight downside, though; we likely wouldn’t have eaten the breakfast even if it was free, as we prefer to visit cafes when we travel.

Make sure you buy the best transport ticket for your trip! In our case, the 3-day GVB card was perfect at 17.50€. We were able to use it on the metro, street cars and buses. The system is a little odd in Amsterdam; you’re expected to check OUT as well as in! Don’t forget like I did once, or your card might not work at some random point. If this happens, just check yourself “out” again and it should start working.

De Koffieschenkerij was so good, we visited twice. This adorable cafe is right in the downtown area; a little oasis in the early morning grime of the red light district. It’s also the oldest church in Amsterdam! You can sit outside in a pretty garden, or inside in a room covered in kitschy drapes.

I can also recommend Scandinavian Embassy, which is in the De Pijp neighborhood. De Pijp is known for being the “hipster” neighborhood of Amsterdam. Our cappuccinos were good and I enjoyed my cinnamon roll, though it was a little dry. My husband got the toast, which consisted of a few whole wheat slices with jam and cheese you could arrange yourself. The service was quick and friendly.

Our first lunch in Amsterdam was in the Food Hallen in the Oud West neighborhood. This food hall is located in the middle of a shopping and cultural center. They had a lot of great vegetarian and vegan stands, as well as plenty of barbecue and burgers for the meat lover in your group. My husband had tacos from Taqueria Lima and we shared the sweet potato nachos from Fento. While neither of us would go as far as to say it’s as good as back in America, or in Cologne, it was pretty good Tex Mex.

On our second full day, we ate at Fou Fow Ramen in the Jordaan neighborhood. I’ve had some really awful ramen since moving to Europe, but this restaurant has great reviews, so I was cautiously optimistic. I’m happy to report that we both enjoyed our soup! I will say, though, that the broth of their shoyu ramen was just a touch too mushroom-y.

Finally, the holy grail: Caldi e Freddi, an Italian deli in Jordaan with the best sandwiches. Anywhere. Not just in Amsterdam. They also have lasagnas, various pasta, marinated vegetables, and desserts. Everything was so cheap, too! I had a Gorgonzola sandwich with lettuce and walnut sauce. So simple, yet mind-blowingly delicious. My husband tried two different sandwiches, and probably would have had a third, if he’d had the space in his stomach.

The Het Badhuis is a restaurant in an old bathhouse in the Indisches Buurt. I chose it because the prices seemed the most reasonable for the area. Our food was delicious, but the pricing seemed much less reasonable once we saw the portion sizes. We ended up having to grab a snack from a nearby grocery store. The service was pleasant enough, even though the waitress brought me the wrong beer. The decor is pretty cool though, and, bonus: there are two cute cats running around!

Our dinner at Little Thai Prince was much more satisfying. In contrast to Het Badhuis, the portions here were almost a little too big. They have a really nice variety of dishes. There’s also a lot of Thai places in Amsterdam, so competition is fierce. I would say this place definitely earned their stellar reviews.

My top recommendation is Bar Joost in the Oost neighborhood. It’s small, welcoming, and the bar tenders were friendly and knowledgeable. We visited twice. During our first visit, a regular had brought in his collection of jazz records and was playing them for the other guests. It has the atmosphere of a cozy neighborhood bar, but with an extensive craft beer selection.

I can also highly recommend Brouwerij ‘t IJ. They brew in a building attached to an authentic Dutch windmill, and right next door, in a former bath house, is their pub. They are open every day (even holidays) from 2 p.m. to 8 p.m.

Immediately upon walking in, my husband remarked that he felt like he was back in America. Most of the seating is communal and it has that unmistakable smell of bleach that many brewpubs have back home. We shared a flight of five beers, and enjoyed every single one. We would have liked to have visited a second time, but their limited hours just didn’t fit into our schedule. Oh well! Maybe next time.

Finally, there’s Café Gollem, a craft beer bar on the North edge of De Pijp. Service was friendly and quick, and they have a decent variety of craft beer.

De Hallen is a pricier market with an eclectic collection of goods, ranging from pop up shops, paintings, unique home goods, clothing, and bikes. De Hallen also hosts cultural events, like photo exhibitions. On Saturdays and Sundays, De Hallen is host to The Maker Market, where you can find many locally-made, hand-crafted goods.

If you’re looking for chocolate, look no further than Tony’s Chocolonely. They offer samples of every flavor and the employees are super friendly and helpful. What makes Tony’s Chocolonely chocolate so unique is that their products are made without slave labor. Large chocolate companies keep their prices low by forcing children to work their plantations. These kids can’t leave and they aren’t paid for their work. The owner of Tony’s Chocolonely couldn’t get any chocolate producer to make slave-free chocolate for him, repeatedly telling him it’s “just how it’s done,” so he decided to make his own. Their products are all really tasty, and can even be found in Germany, Belgium, Sweden and the USA!

Stroopwafels, which are thin cookies in the shape of waffles with caramel in the middle, are a staple of any visit to Amsterdam. If it’s for you, get it fresh from one of the markets or one of the many bakeries. Want to bring them back as a gift? You can get them from basically any grocery store. Don’t bother with the tourist shops; they’re selling the same thing for a higher price.

There are many cheese shops in Amsterdam. Most of them have free samples, so you don’t have to commit to that expensive raw milk farmer’s cheese without knowing what you’re getting. After scouring reviews, we bought three different cheeses from De Kaaskamer. So far, I’m happy to report that they were a purchase well-made.

With only two-and-a-half days in Amsterdam, we didn’t visit any museums. We decided it was a waste to spend half the day in a building, since our time was limited. That being said, some of the very best museums in the world are in Amsterdam. Go here to see what your options are if you have more than a few days in the city.

Walk through a Park

Vondelpark is the most famous park in Amsterdam. It’s found right next to the Museum District, between the Zuid and Oost neighborhoods. This park is huge, and it’s very pretty. It’s a great spot for photography, spotting wildlife, people watching, or just getting away from the city for a bit.

Westerpark is smaller, but it was my favorite. There are a few different trails, some interesting public art here and there, and you can even go into what appears to be a swamp. I’m not sure why you would want to go out there, but we did see several people (literally) mucking about.

The centerpiece of this park is the Westergasfabriek, a former gas plant that is now used as a cultural center. Like De Hallen, the building hosts a variety of events, pop-ups, and also permanent shops like Tony’s Chocolonely. There are also several bars, including a bar arcade called The Ton Ton Club. You can play a wide variety of Japanese and American arcade games here, from classic pinball to Dance Dance Revolution.

We decided to do the free walking tour of Amsterdam with Sandeman, a well-known tour company throughout Europe. I was hesitant to take a free tour, but the reviews on TripAdvisor were excellent. Unfortunately, our experience didn’t match the hype. Our guide was 10 minutes late, which set the tone for the rest of the experience. Much of the tour was spent standing in random places, and hearing general facts that you could find on a wikipedia page. Several people actually left mid-tour; presumably, out of boredom.

One highlight that I otherwise never would have found on my own, though, is the narrowest house in Amsterdam. It’s pictured left.

Personally, I think we simply had bad luck. If you’re not convinced, though, there are several different tour companies to choose from in Amsterdam.

If you don’t think of bikes when you think of Amsterdam, then you’re doing it wrong. Bikes are everywhere, including where they shouldn’t be; for example, the middle of a bridge or blazing through a pedestrian crossing. I enjoy cycling, but Amsterdam almost made me start to hate bikes. You can only narrowly avoid getting hit so many times before you start to wish you had some thumb tacks to throw on the ground.

Why be the victim of a hit-and-run when you can be the perpetrator? It’s like they say: if you can’t beat ’em, join ’em! There are several places you can rent a bike, from a few hours to the entire day.

Check out the Memorials and Public Art

Finally: even if you don’t have time for a museum, there’s plenty of art to see all around the city.

That covers everything! Hopefully, if you’re planning your own trip to Amsterdam, this post was able to inspire you. Next week, I’ll be back to talking about Germany.