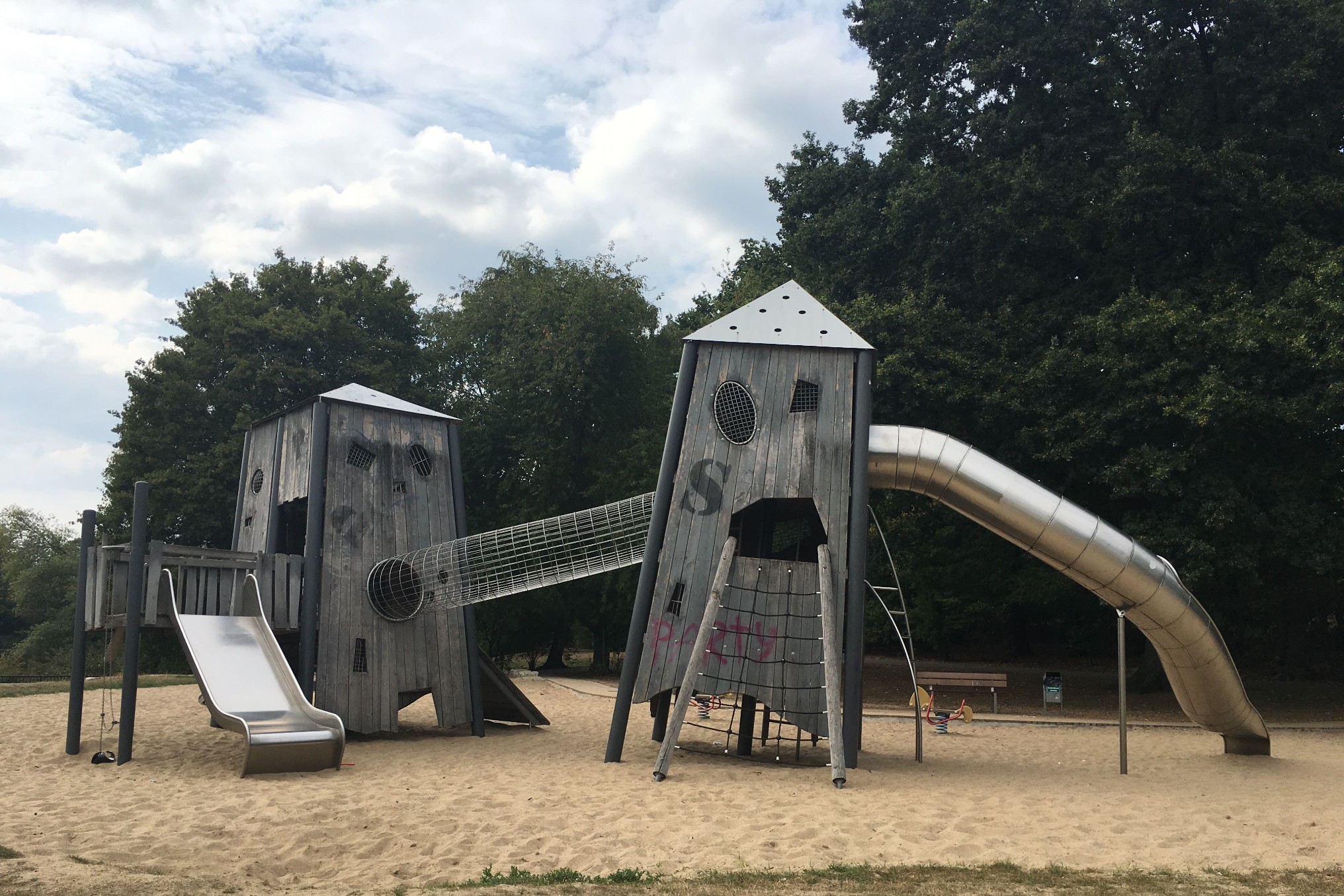 Playgrounds in Germany range from the average to the impressive. There are a lot of them, too; in my little city of Wolfsburg alone, with a population just over 120k, you’re within a 5 minute walk of a playground from basically any starting point. Depending on where you live, that might not sound so impressive; for me, though, it’s definitely one of the big differences I’ve noticed between my new home and my old one.

I grew up in a place where public parks and playgrounds were few and far between; probably, because everyone lived on at least a half-acre of land. I had a tiny swing and slide set, but some of my neighborhood friends had what looked like (at the time) professional playground equipment. Similarly, there wasn’t any need to go to a park to do any cookouts or parties; all of our yards could accommodate large groups of people and most of our neighbors had a fire pit.

After I moved to the suburbs of Detroit, I was initially surprised by all of the public parks and playgrounds. Then, I finally realized the (obvious) reason why; neighborhoods are more condensed, and yards are smaller. Having a big, open area for kids to meet up and play and adults to barbecue only makes sense.

Playgrounds and parks are even more plentiful here in Germany. They often look quite different, too. For one, many of them turn into teen clubhouses at night. I know teens hang out in playgrounds at night in America, too, but usually they’re breaking some rule by being there after dark. I haven’t noticed any posted rules about park or playground areas here in Wolfsburg. With unruly teens usually comes graffiti, and graffiti in Germany never really goes away; so, even popular playgrounds end up looking like urban ruins.

That’s not the only reason I describe them as post-apocalyptic, though. Some of them, at least here in Wolfsburg, look like they were originally designed to look like a settlement in the Fallout series; graffiti or otherwise.

Well, that or a pirate ship.

And even many of the run-of-the-mill playgrounds here still have some, uh, interesting design choices.

Aside from the above being total nightmare fuel, I love the design choices for these playgrounds. Not only are they really interesting to look at, they inspire more imaginative play than just swinging or sliding down a slide ever could.

Do you have any interesting or weird playgrounds where you live? Let me know in the comments! Bonus points if you have a picture, but don’t worry; my imaginations pretty tip-top if you don’t, despite my lack of cool playgrounds growing up.

As always, if you enjoyed this post or any of my others, remember to subscribe. Sharing it is also really helpful. Follow me on Twitter for sassy commentary and the weird stuff I spot in my day-to-day life in Germany, and follow me on Instagram for the “nice” photos I take.