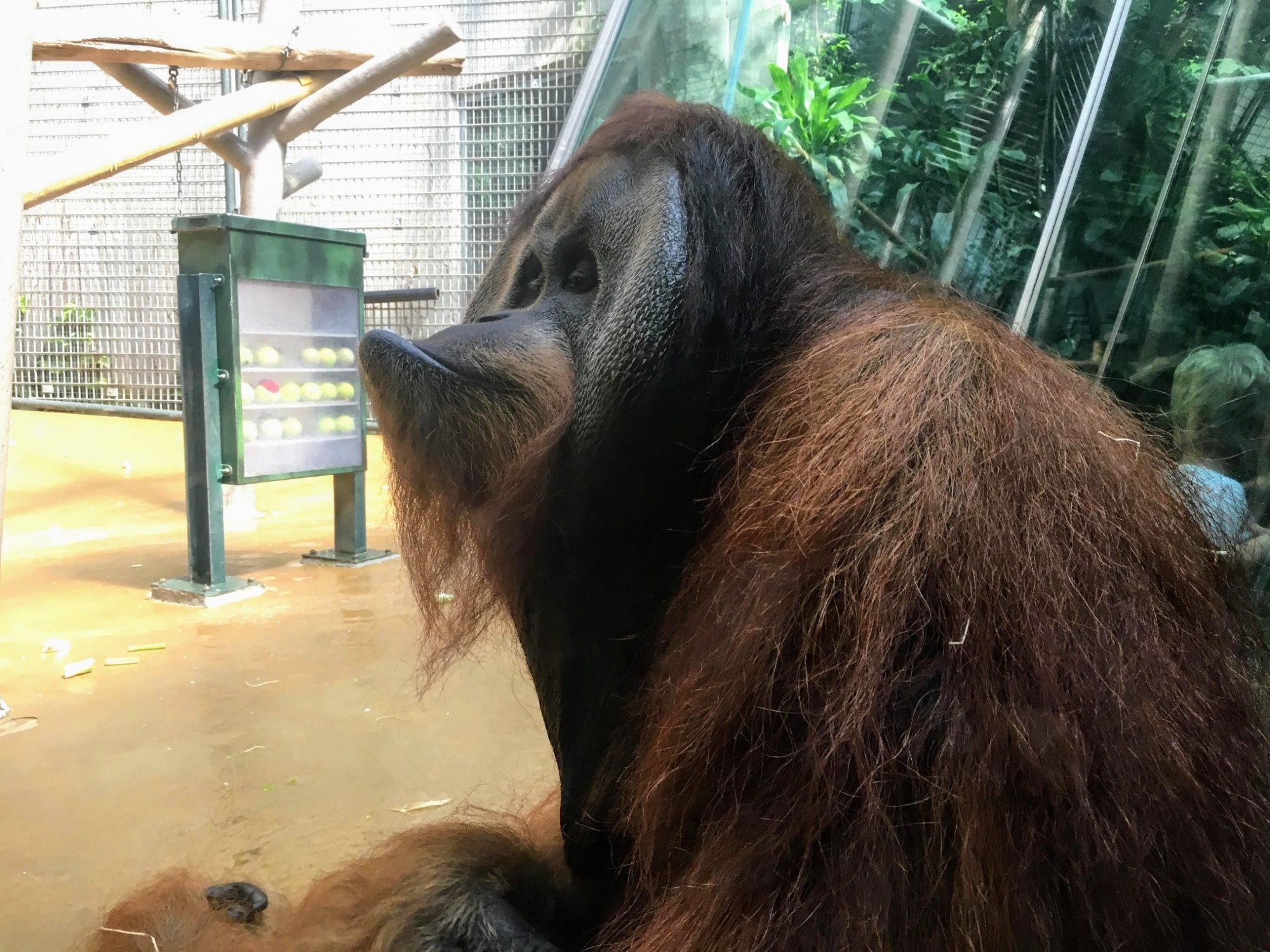 The Hannover Zoo is the fifth-oldest zoo in Germany and contains around 237 different species. My husband and I, along with two good friends, recently had the chance to visit. There are several different themed areas, including the African savanna, the jungles of Asia, the Australian outback, and the Yukon. They also have an area called Gorilla Mountain, which houses several other primate species besides gorillas.

Visitors can tour the African savanna on foot, or by boat through an artificial river. Usually, transportation rides in zoos cost extra money. I was pleasantly surprised to find out that this isn’t the case at the Hannover Zoo. Unless you get lucky, though, the boat ride doesn’t really provide a better view than going by foot. There are still barriers, after all! Nonetheless, it’s a nice little break if you simply want to relax and take a break from the crowds.

The Hannover Zoo also has a few different live shows. The first we watched was primarily about birds, though they did bring out a coati at one point. They exhibited two different hawks and a pair of mischievous parrots. Although the hawks did exactly as they were instructed, one of the parrots had other ideas. At one point, she had the parrots spread and flap their wings. One parrot obeyed, while the other stuck its foot out. Later on, when she gave the foot command, it spread its wings. During a memory exercise, the rebel parrot ignored the toys it was supposed to sort, and crawled around on the handler’s shoulders and back, looking for treats.

The second live show was in the Yukon Bay area, and featured different types of seals. This time, the handlers put on more of a show by pretending to be crew members of a ship in the Yukon Bay. The seals jumped through a few hoops, did a cute trick where they pretended to be a shark, and danced with the handlers to the song Drunken Sailor. Then, they brought out a bald eagle. All bald eagles in captivity in the USA are injured. So, needless to say, it was interesting to see one flying. Both handlers went into the crowd and took turns calling the eagle, so everyone could get a close look.

One of the highlights of this zoo is the pelican area. Or, more accurately, our friends brought it up on several occasions, before we left, as though it were a highlight. Honestly, I love all animals, so I can’t say I don’t like pelicans, but…I don’t necessarily want to get close to them. Their giant pocket beaks are freaky, OK? Also, this happened:

Bizarrely (at least, in my opinion) you can stress out the pelicans and risk getting bit all you want, but the farm animals in the kids’ area are behind fences. In most of the zoos I’ve been to, the area with the farm animals is usually a petting zoo. It’s also fairly standard that you can go inside the goat and sheep enclosures.

You can still pet most of the farm animals through the fence at the Hannover Zoo, but you can’t go into the pens with them. I actually think this is a good thing, as it provides the animals with a way to escape the grabby hands of children. I’m just not sure why the pelicans aren’t afforded the same courtesy. They can “escape” across their narrow pond, sure, but it’s a pretty small area overall.

The hippos had the best exhibit in the Hannover Zoo. There are several viewing areas, both above and below the water, so seeing them is almost guaranteed. They were constantly popping out of their pond to blow water into the air through their nose. Also, there was a baby!

The entire Gorilla Mountain area was similarly accommodating; there are viewpoints both in and outside. The glass is mercifully sound-proof; you could hardly hear the unruly children constantly banging on the glass. I don’t think we saw any gorillas, but we did see plenty of chimps and one very laid-back orangutan.

Normally when we visit zoos, all of the large cats are sleeping; either out of sight or just barely in sight. We had a bit more luck at the Hannover Zoo; I watched one of the tigers playing in the water and the lions were up and walking around. In fact, the male lion roared on several occasions. He was doing it so often, I started to wonder if he was actually trying to cough up a hairball. It turned out that he was probably growling at the giraffes; they were clearly within the lions’ line of sight.

The Yukon Bay area is the most aesthetically-pleasing part of the zoo. The entire zoo is well-designed, but this zone seems to have received extra attention thematically. All of the buildings are modeled after a small Yukon fishing village, and the animal exhibits are all cleverly integrated into several fake ships. The underwater area is expansive, but we unfortunately didn’t see a single animal swimming. The penguins (all the South African variety) were huddled in the shade by one of the fake ships, and the polar bears were nowhere to be found.

I was also very pleased with the wolf exhibit. Most zoos only have one or two wolves, which is a sad way to treat pack animals. The Hannover Zoo has at least five wolves, and they’re kept in a very large area, complete with a fake cave.

Like many zoos these days, the Australian outback area lets patrons walk through the wallaby exhibit. Some zoos also have kangaroos in the same enclosure, but the Hannover Zoo keeps them separate. Either because of the heat, or out of angst, most of the wallabys were as far away from the path as they could get.

Last, but certainly not least, there’s a large guinea pig enclosure at the zoo entrance.

Overall, I would say the Hannover Zoo is definitely worth a visit.

So far, the Leipzig Zoo is still my favorite German zoo. We’ll have to see in October if Tierpark Hagenbeck in Hamburg ends up taking the number one spot.