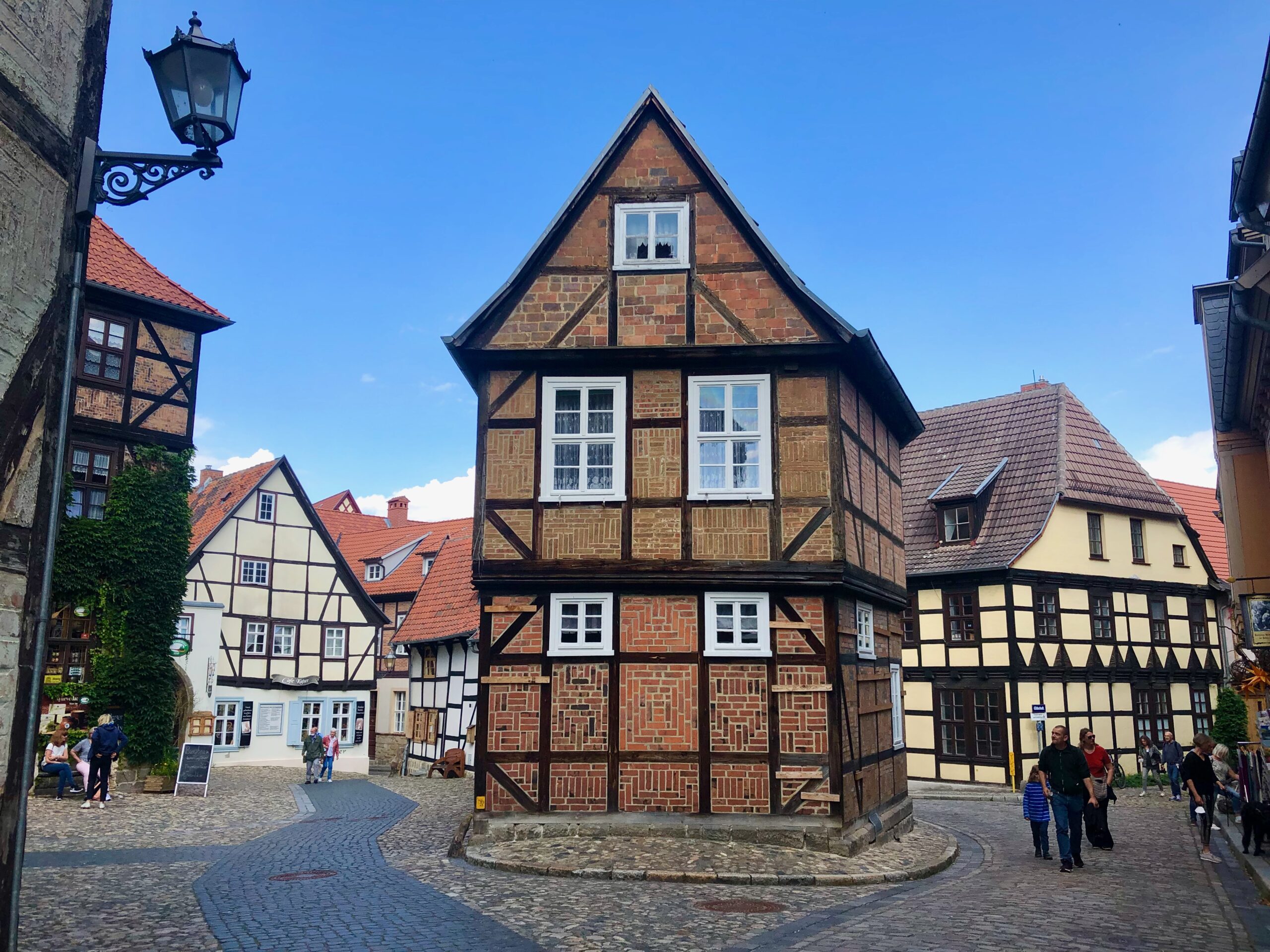 Full disclosure, Quedlinburg only has one castle on a hill (that I know of). So, the title is kind of a lie. The singular form just didn’t sound as nice, OK? And, no, I can’t explain why; it’s not like a have a degree in linguistics or something. Just a lousy English degree.

Moving on. Quedlinburg is a single-castle town just north of the Harz Mountains of Germany. We visited last Summer with our friends, and stayed in an adorable apartment owned by the best-smelling cookie shop in Germany, Keksmanufaktur. Whether or not they’re the best tasting I, unfortunately, cannot say; we never found the time to actually buy cookies. They were always open too late in the day and closed too early in the evening. But, hey; that’s on us for not planning better. There were samples in the apartment, though, and they were delicious.

I spent the days with my friend Käthe, while our husbands were off mountain biking. On the first day, we walked around the town, did a little light shopping, and visited the church at the top of the hill. Sadly, the castle was closed for renovations, so we were unable to look inside. The church was full of artifacts and faded murals, along with plenty of signs warning against flash photography, which we watched a number of people flagrantly ignore. The artifacts were interesting, but they were in small rooms and, like the warnings not to use flash, the other tourists were ignoring the signs on how many people could be in the room at once. Not wanting to risk catching Corona, we left pretty quickly.

The garden around the church was pretty, despite most of the flowers being basically dead by then. The views were also fantastic.

At some point, Käthe and I had cheesecake; whether it was on the first day or second, I can no longer say. What I can say, however, is that it was amazing. Käthe, being much more ladylike than I will ever be, couldn’t finish her ginormous slice of cheesecake, but I absolutely inhaled mine. It was gone by the time I had even thought to take a picture; it was that good. So, if you’re in the area, check out Vincent – Café & Käsekuchenbäckerei.

On the second day, Käthe and I drove out of the city to do a small hike up to the Teufelsmauer (Devil’s Wall), a natural rock formation that locals used to believe was formed by the devil. It’s very striking; I can see why medieval Germans thought there was something supernatural behind the sharp, oddly-jutting rocks.

That night, we did an evening tour with a guide who was dressed as a medieval night watchman; something I’d done previously, in Dresden. I found his tour to be entertaining and highly informative. As a self-described walking tour connoisseur, I’d even go so far as to say this was one of the better tours I’ve been on. I recommend taking this tour if you visit Quedlinburg. Just be warned: the tour is only available in German.

Either on the first or second night, we visited the Ruinenromantik Kornmarkt 3, a cafe, beer garden and bistro all rolled into one and located within a ruin. When I say ruin, I do mean a ruin; the ceiling is missing, many of the walls are crumbling, and the basement (where the bathrooms are located) is spooky as hell. All that is to say, it’s super cool. They have a good beer selection and very tasty sandwiches. Regrettably, I didn’t think to take a picture until it was already night time, and the picture my phone camera took just doesn’t do the place justice. So, you’ll just have to believe me when I say it’s worth a visit for the aesthetics alone; the food and drink are a nice bonus.

And that was our trip to Quedlinburg! I was really surprised by just how many interesting things could be packed into such a small, sleepy little town. I didn’t even touch on all of the other amazing ruins scattered throughout, or the huge (and possibly abandoned?) mansions just outside the town center. It’s a fascinating place and should be on your list of places to visit in Germany.