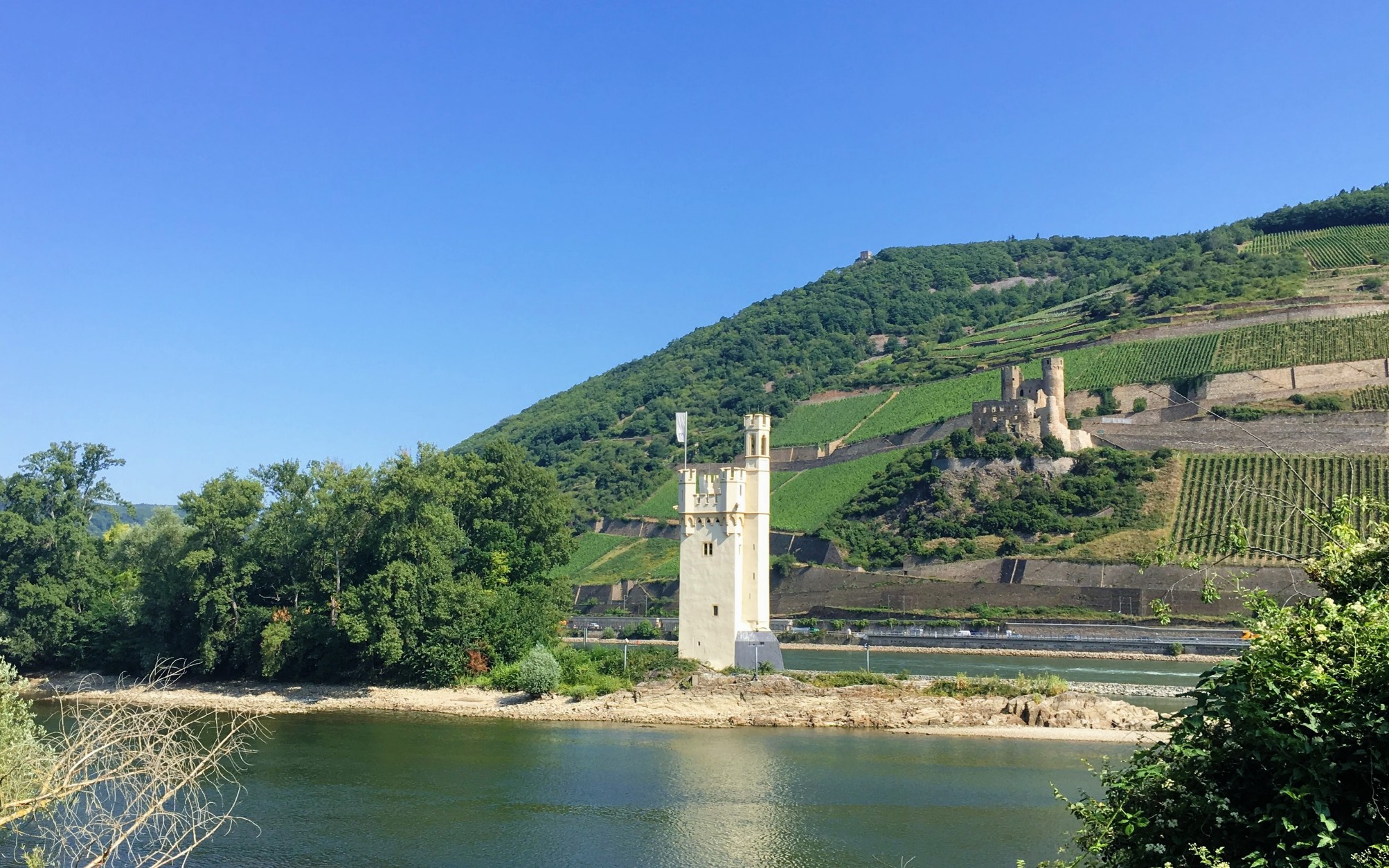 Cycling along the Rhine River is a popular Summer vacation here in Germany. So much so, that there are tourism companies dedicated to planning your entire cycling trip. They book all your hotels and transport your items, so you don’t have lug them around on your bike like some kind of peasant. Not sure where you’re going? No idea how to use Google Maps? Never fear! They will supply you with a map. The only thing they don’t do is ride along with you and give an actual tour.

My husband decided “we can do all that ourselves” and saved us several hundred dollars. With a little bit of research, we planned the route and booked our hotels. By packing light and using waterproof bike bags, we transported our stuff on our own. I’ll admit, I was a little afraid the heavy bags on my bike would only accentuate my natural clumsiness. Thankfully, that wasn’t the case! I did eat pavement at one point, but that was when we were already back in Cologne and my bike was bag-free.

Our cycling trip began in Mainz. This nice, small-ish city happened to be hosting a beer festival along their river walk on the day we arrived. It was packed with people, and for good reason: there must have been over 50 beer and food stands. Although most of the beer was from large, commercial breweries, there were a few local craft options as well. My husband had an IPA he liked and I had a pear cider I absolutely hated. It was way too sweet, which we later realized is because it was apple cider flavored with pear juice. That’s the luck of the draw, though! With so many options, there were bound to be a few…bad apples.

We got up fairly early the next day, and cycled along the Rhine to Ruedesheim. Along the way, we visited Eberbach Abbey, which is a former monastery founded in 1136. For a time, it was the largest and most active monastery in all of Germany.

Currently, it’s a winery, historical site, and the yearly location of the Rheingau Musik Festival. At the time, we didn’t think it was worthwhile to pay to explore the inside of the Abbey, but since checking out their website I’ve had a change of heart. It looks like you’re able to see quite a bit of the buildings, including the church, dormitories, and even the basement where their wine is stored. Some advice if you’re planning to visit by bike: pick the right route. Cycling up there was a bit of a challenge, as the route we chose started out rather steep.

Since our first day of cycling came in at just under 35km, we arrived at our hotel in Rüdesheim am Rhein around 1PM. After checking into our room and storing our bikes, we took a gondola ride up to Niederwalddenkmal. This monument is dedicated to the founding of the German Empire, after the end of the Franco-Prussian war. The central figure is Germania, and the bottom relief features Kaiser Wilhelm I surrounded by his military and the nobility. The monument is impressive, as is the view of the Rhine and town below.

The view on the gondola ride is also impressive, but I spent most of the ride fearing for my life. My husband was quick to point out that I’m perfectly fine with riding roller coasters, so a gondola ride should be a breeze. Since fear isn’t rational, that didn’t really make me feel any better. The only thing that did work was distracting myself by taking photos.

We didn’t stay at the monument for very long. Partly because there wasn’t much to do up there, but mainly because we wanted to watch the final game of the World Cup. We explored the town for about a half hour, and then grabbed a table at Drosselhof. This traditional German restaurant is located along the famously-narrow Drosselgasse street. The decor is quaint, the food and wine are excellent, and the staff is very friendly. What more could you want? Well, I personally wanted Croatia to win the World Cup, but sadly that wasn’t to be.

Our second day of cycling was full of a lot of stops; the first of which was a hike up to the Chapel of St. Roch. This church has been rebuilt several times, due to war and fire. I didn’t find it particularly remarkable, but I had also just pushed my bike (and belongings) up a rather steep incline to get there. Short of finding Jesus himself, I wasn’t likely to be impressed by much. At least cycling back down was fun.

Our next stop was the Rheinstein Castle. Mercifully, we left our bikes locked up at the bottom of the mountain this time. Hands down, this was the best castle we visited. There’s a small fee to enter, but I think it was worth every last Euro. Very little of the castle is off limits, there’s no security guards watching your every move, and (most importantly) it’s beautifully maintained. The current owners did an excellent job of restoring the castle. You can see just how much work was done in the rooms on the very top floor, as it was purposely left unrestored.

After cycling a little ways further, we did our second hike of the day up to Castle Fürstenberg, a ruin of a castle built in 1219. It’s remarkable for the fact that no restoration work was ever done, so much of the original medieval plaster and paint are still visible. This ruin is climb at your own risk; there are no employees there, should you make a misstep and tumble back down the mountain. Someone did install a ladder, but that’s the extent of the help you will receive.

We decided against this part of the climb, as it was full of thorn bushes and stinging nettle. Thankfully, you don’t have to take this path to see most of the ruin, including the main tower. There’s a hole in the side big enough to climb through, and I definitely saw a ladder in there, but my fear of spiders stopped me from doing something incredibly stupid.

It wasn’t much longer before we reached our hotel in St. Goar. We dropped off our stuff, and our bikes, and headed across the Rhine to Mt. Loreley (Lorelei). This is a steep slate rock formation with a small waterfall which, in combination with the strong currents of the Rhine, produces a murmuring sound. Unfortunately, you can no longer hear the murmur due to the urbanization of the area.

Despite this, the Loreley remains one of the most popular tourist spots along the Rhine. This is largely in part, perhaps, due to the myths and songs surrounding the rock formation. Interestingly, although many people think the legend of Loreley is an old folk tale, it’s not. The legend of Loreley began in 1801, when Clemens Betranto composed his ballad Zu Bacharach am Rheine, which tells the story of a love-lorn beauty named Lore Ley who falls to her death from the cliff. Later, Heinrich Hein wrote a poem in which Loreley was not a victim, but a siren accidentally luring sailors to their doom with her distracting beauty. That poem was eventually set to song, and became famous throughout Germany.

We took a long set of stairs to get to the top. The marker at the bottom says the climb will take about a half-hour, but it took us only 20 minutes even though we were tired by that point. It’s definitely not a fun climb, and many of the steps are uneven or broken, but it’s all worthwhile when you get to the top. The view of the Rhine from the outlook is quite beautiful and there are a few things to do. We noted a museum, a snack stand, an area for outdoor concerts, and the most important attraction: a toboggan ride.

My husband was on a mission to do the toboggan ride before it closed. You see, he needed to right a wrong that had been done to him in his childhood. During a school field trip in the Harz, his class ended the day with a toboggan ride. Unfortunately, there was an old lady with her grandchild in the cart in front of my husband. She screamed the entire time, and kept braking so hard that he couldn’t go as fast as he wanted. And he wanted to go fast. Sadly, it was not to be; shortly after his disappointing ride, he had to get back on the bus with his peers and return to school.

Anyway, long story short, I should have driven my own cart. My husband claims he was braking when the signs said to, but I am pretty sure we almost went off the track on several occasions.

By this point, we had cycled about 60km and were roughly a third of the way to Cologne. The rest of our cycling trip along the Rhine would take us another three days. Along the way, we visited some culturally significant sites, took another damn gondola ride, and had some amazing Afghani food. Click here to read part 2!