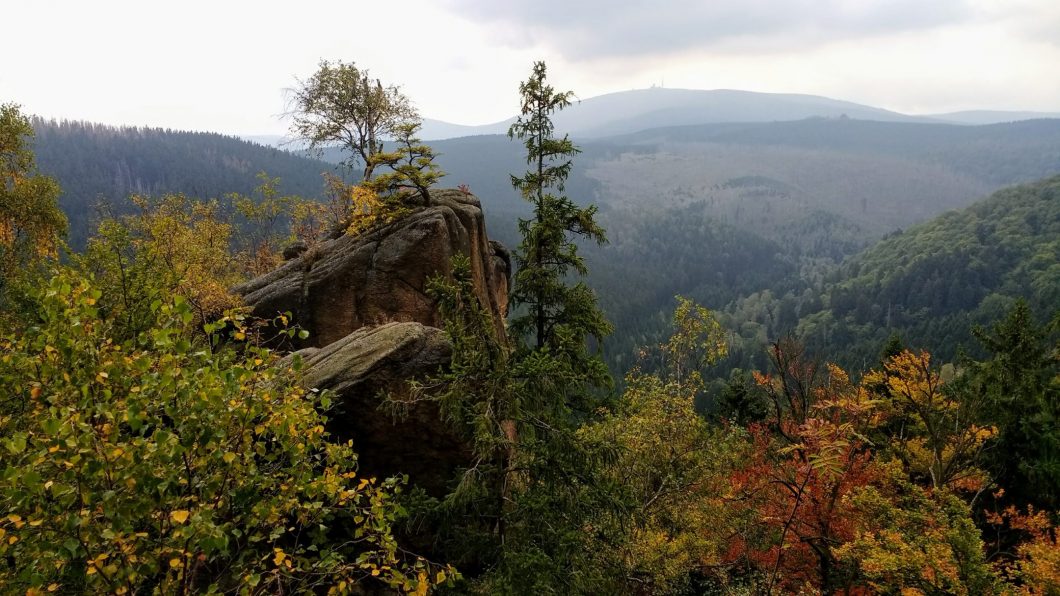 I was supposed to have a post up last week about our visit to Prague. Unfortunately, as it sometimes does, life got in the way! The post is all ready to go. I just need to get the pictures I took off of my husband’s cameras. Fingers crossed, that post will be up this Thursday. In the meantime, I’ve decided to post about a hike we did a few weeks ago in the Harz Mountains.

This was actually my second visit; I did a hike in 2015 during my first visit to Germany. During that trip, we hiked up to The Brocken, the highest peak in the Harz. It took all day to get to the top and back down again. I found that the hardest part of the hike wasn’t necessarily the climb (though that wasn’t exactly easy, either) but the uneven terrain. “Hiking” back home in Michigan is just taking a walk through a flat forest, with the occasional tree root in the way. Unless you’re in the Northern part of the state, we barely have anything higher than an anthill. Needless to say, a real mountain was more of a challenge.

I was tricked into being excited for the 2015 hike by the promise of a fox at the top of the mountain. Well, there was no fox. Maybe it was just too windy for him that day, and he didn’t want to risk flying off the mountain. After all, we did watch someone’s heavy-duty stroller soar through the air when we reached the summit.

There was no fox this year, either, but there was a lynx. Two, actually; though the sign said there was a third one lurking about somewhere. When we first got the invitation for the hike, my husband was under the impression that we would be able to pet a lynx at the end of the hike. I think something must have been lost in translation, because that definitely didn’t happen. They were behind a fenced-in area, and too far away for me to get a decent picture with my phone. One of them was sitting with her back to onlookers, while the other was stretching himself out near their cave.

Once again, I was lured into a hike with the empty promise of cute animals.

Regardless of the animal quota that both trips failed to fill, it’s hard to feel let down when you’re surrounded by the beauty of the Harz. As I huffed, puffed, and sweated profusely on our way up the moderate incline of our chosen path, I often found myself wishing we had waited a few weeks to go, when the autumn leaves would be in full “bloom.” Even though it was late September, the further up we went, the more the trees were already starting to change.

Lunch was at a little cabin-like place in the middle of the forest. You could either eat inside, at a regular restaurant, or order from a small stall off to the side. It offered cheaper options like french fries, smalec, sausage, and pretzels. What was nice about this place is that there was a sign stating that you were welcome to use the outdoor seating even if you brought your own food, or just wanted to take a rest. While having lunch, we saw some cyclists who were taking a break in the middle of their ride. As a person who struggles with long-distance rides even when the path is relatively flat, my calves started to ache just imagining how tough that ride must be. Or maybe they were aching from the hike; who knows.

We also explored the Harzburg Castle ruins. There isn’t much left; most of the ruins are just labeled bits of path here and there. The powder tower is the most complete of the remaining ruins, and for good reason; the walls are extremely thick in order to withstand blasts. The castle itself has not been an imperial castle since 1218, when Otto IV died. Although it has been occupied a few times since his death, it was mostly left to decay and was eventually partially demolished in the 17th century. Archaeological investigations did not begin until 1902.

I’m hoping to go back to the Harz next year for the Walpurgisnacht festivities. In German folklore, Walpurgisnacht is a night where witches meet on the peak of the Brocken to celebrate the coming of Spring. Witches are a big part of Harz tourism all year round; if you enter one of the gift shops, most of the merchandise will feature a stereotypical, long-nosed and wart-faced witch. We even saw a woman dressed up as a witch and leading a small tour group at the beginning of our hike. For Walpurgisnacht, there are several celebrations and activities across the Harz, including bonfires, a performance of a Faust rock opera at the Brocken, and entertainment by the Wolfshäger Hexenbrut, a German entertainment and dance troupe that dress up like witches. You should click that link to watch one of their performances.

I’ll leave you with a few more images from our hike, or you can take a look at some photos my husband took during our 2015 trip.