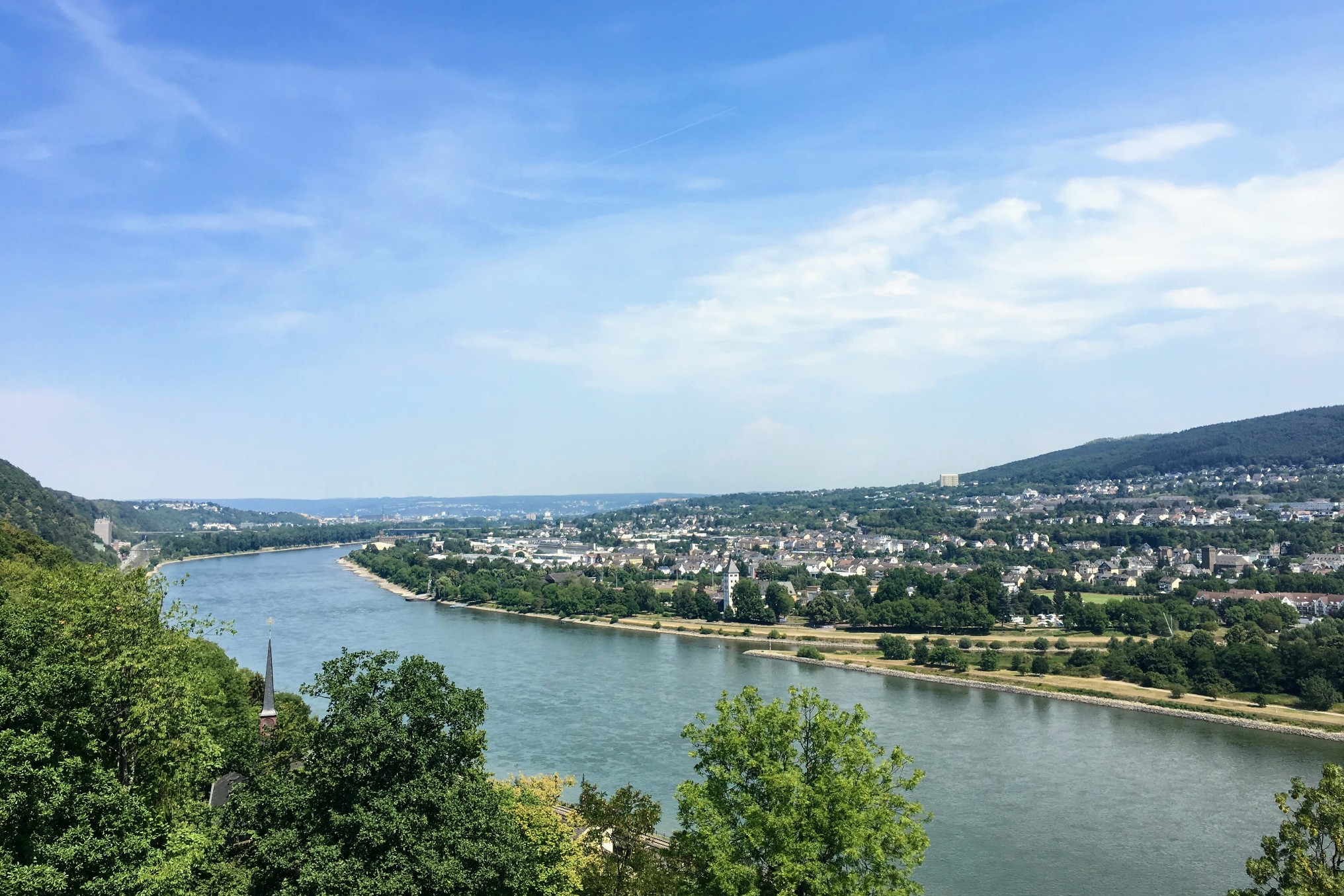 My husband and I recently completed a 5-day cycling trip along the Rhine River in Germany. This post covers the last three days of our vacation. If you’d like to read about the first half, which is full of castles and deadly toboggan rides, click here!

On our third day, we stopped to explore Stolzenfels Castle. Many important historical figures have stayed in this castle, including Queen Victoria. Originally, it was a fortress used to protect a nearby toll station on the Rhine. After being later occupied and then destroyed, it was used a quarry until it was gifted to Prince Frederick Wilhelm IV in 1823. Frederick was particularly fascinated by the history and romanticism of the Rhine Valley; so, he had the castle restored.

Unfortunately, photography isn’t allowed inside the castle itself. We were able to take pictures outside, though. The garden is beautiful and you can also take some really nice photos of the Rhine at several outlooks.

In Koblenz, we took another gondola ride; this time, up to the Ehrenbreitstein Fortress. These glass gondolas can fit about 10 people each, which should (in theory) make them feel safer. Instead, I felt like I was stuck in a hot death trap.

Thankfully, we (somehow) survived the ride and were able to explore the fortress.

Ehrenbreitstein Fortress was completed in 1834, though there have been several others occupying the same space since the 10th Century. American General Henry Tureman Allen stopped it from being dismantled after WWI; he believed it was too culturally significant to be destroyed. In WWII, it was used to store archives and cultural artifacts. After that, it became a refugee camp, a hostel, and, at one point, a small section was used as a private dwelling. Since 1956, it has been a museum.

Back in Koblenz, we stopped in a beer garden for a radler (half beer, half lemonade) and then headed over to the German Corner. This monument was erected in 1897 and is dedicated to the first German Emperor, Wilhelm I, in honor of his efforts to unify Germany. It was accidentally destroyed in WWII by an American general, who had it fired upon because he falsely believed it to be a base of operations. In 1949, it became a symbol for Western Germany’s wish for German reunification; a German flag was placed where Wilhelm had once stood. Around the monument, the crest of each German state was placed, including the pre-WWII states that were now East German.

In 1989, after David Hasselhoff single-handedly ended communism, that wish for unity finally came true. Emperor Wilhelm I was restored in 1993. Crests for states in the former East were added, though the old crests remain.

Our fourth day was our longest. We cycled about 60km from Koblenz to Bad Godesberg, which is a suburb of Bonn. It was also one of the hotter days of our vacation; so, we stopped around the halfway point to visit the Roman Baths of Bad Breisig. This spa sources its water from a hot spring, so the water is very warm and also very salty. The spa has a fountain where you can taste the water. It includes a sign that states arsenic is filtered out of the swimming pools, but not the water fountain.

While my husband translated the sign, I watched a woman fill up two large water bottles. No worries, though; they helpfully suggest asking your doctor before drinking large quantities. I’m sure she noticed the tiny sign before committing to possible arsenic poisoning.

Many people believe that hot springs and mineral water have healing properties. I think that’s a load of woo nonsense, personally; but, I also think it’s much nicer than swimming around in chlorine. So, I did enjoy my time at the Roman Baths. It was great to get out of the mid-day sun and relax. Although for 17€ for two hours, per person, it’s definitely overpriced.

We had hoped to visit the German Old Faithful, AKA the Andernach Geyser, but the only entrance we could find was locked. The sign stated that you needed to be part of a tour to use the gate. Said tour began several kilometers back the way we came and required you to pay for a ferry ride; even though it was all on the same side of the Rhine. I’m sure there was another entrance somewhere, but we didn’t want to waste too much time looking and decided to press on.

We finally arrived in Bad Godesberg in the evening. This little suburb of Bonn must be where all the rich people live; it’s really nice. The houses lining the streets outside of their downtown reminded me of old American lumber baron mansions. If you plucked any one of these beauties off the street and placed it in one of the wealthy old neighborhoods of New Orleans, it would blend right in.

Bad Godesberg seems to have a really high immigrant population. More often than not, that’s usually a good sign when it comes to food. My husband found a highly-rated place called Zafran Restaurant. They serve Afghani food buffet-style. The food was delicious and the woman working the register was so friendly and helpful. My husband asked her if they had vegetarian options, and she could have simply said yes; instead, she pointed out everything I could eat. I had two plates, wanted a third, but wisely decided against giving myself a stomach ache.

If you’re ever in Bad Godesberg, please check out Zafran Restaurant; you will not be disappointed! They earned every single one of their good reviews.

For the final day of our ride, we spent a lot of time in Bonn before arriving in Cologne. Bonn was Germany’s capital back in the days of West and East Germany. The old government buildings have been re-purposed for other uses, such as the United Nations and the Secretary of Agriculture. Each building has a plaque that describes the former function of each building, as well as what they’re currently being used for. We did a quick tour of each building on our bikes. Then, rather than continuing along the Rhine, we stopped at the Haus der Geschichte to avoid the midday heat.

The Haus der Geschichte is a history museum that focuses on Germany’s history post-WWII. The permanent exhibition begins right after Germany was defeated in WWII and ends with current times. It’s full of objects like toys, clothes, household appliances, and other vintage goods; each object helps tell the history of both West and East Germany, reunification, and the 30 years since.

The Haus der Geschichte is huge. We were there for two hours and could have easily stayed for two more. What makes it even better is that this well-curated museum is free, though they do encourage donations. If you’re going to be in Bonn, make sure you visit this museum.

After a quick lunch at Hans im Glück (the best chain restaurant in Germany) we were back on the bike path by 1:30PM and on our way to Cologne.

We arrived at our AirBnB shortly after 3PM, having cycled a total of 185km (115 miles) along the Rhine over the course of 5 days. I really enjoyed this vacation, and I highly recommend doing your own cycling trip along the Rhine. It’s the perfect mix of leisure and activity. The views are spectacular, there’s a lot of history to take in, you have plenty of great opportunities for excellent food and drink, and you get just enough exercise to justify your bad food choices!

Next week, I’ll have a post about Cologne. We had a great time and (perhaps most important of all…) we found good Mexican food! In Germany!

Until then, you should check out my husband’s post about our trip!