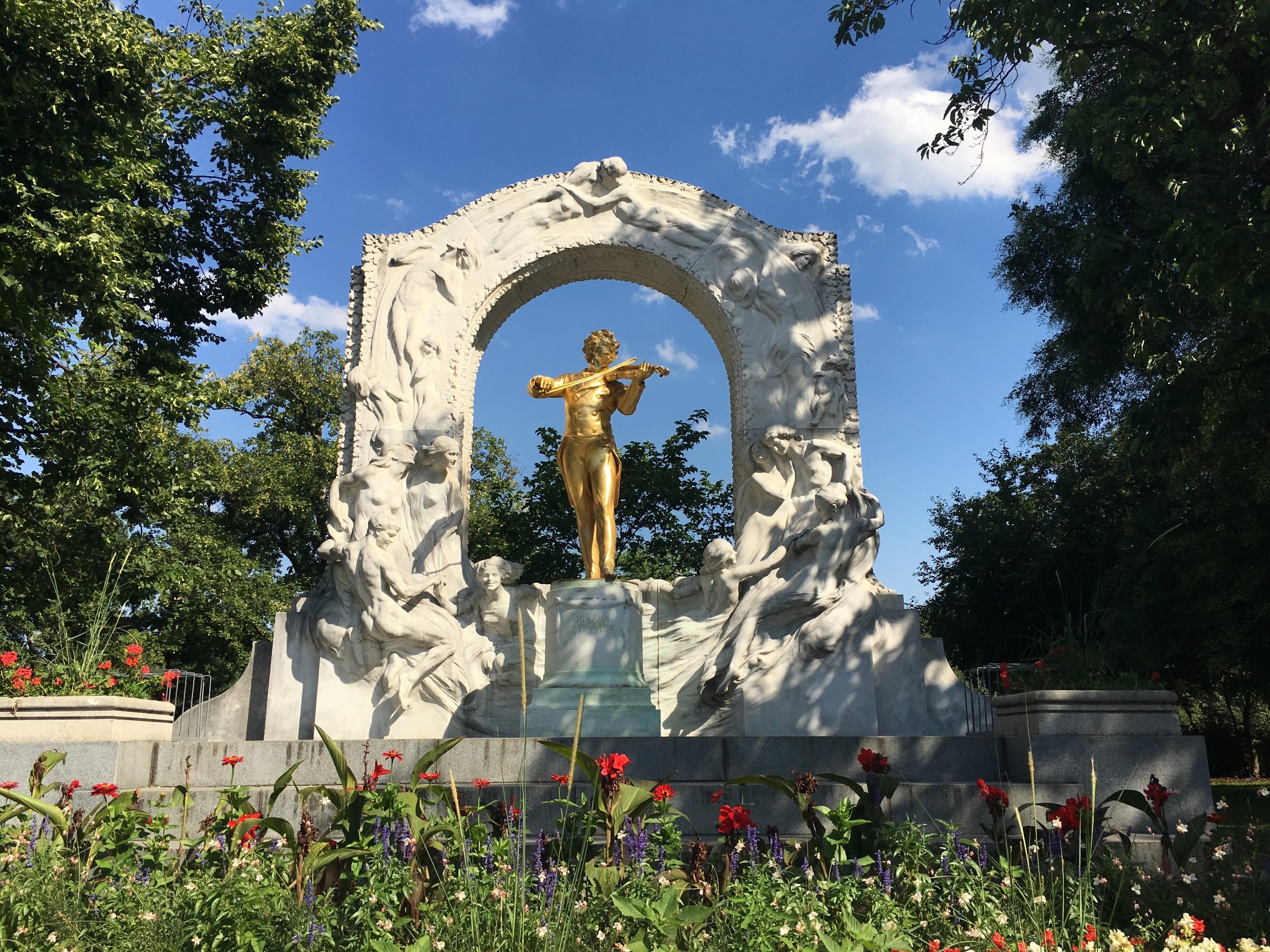 I’ve recently returned from an amazing two-week stay in Vienna, Austria. I was there for the Goethe Institute’s 2-week language and culture course. We spent about 4 hours learning German every morning, and the rest of the day was centered around leisure activities. Of course, you’re under no obligation to do any of these activities. If you want, you can explore the city on your own after class. As someone with a “I paid for this, I’m getting my money’s worth!” mentality, I made it a point to do nearly all of them. The tours were entirely in German, but they did occasionally translate certain words into English.

Our first tour was around the city center, where we learned (among other things) about a bitter legal battle over…cake.

The Sachertorte is, arguably, the most famous of Viennese foods. It was created by Franz Sacher for Prince Wenzel von Metternich. Sacher’s son, Eduard, perfected his father’s recipe while working at a bakery called Demel. Long story short (which you can read about here) a legal battle ensued over who could call their cake the original Sachertorte. The contenders were Demel and Hotel Sacher, which was originally owned by Eduard’s family before they went bankrupt. Eventually, the hotel (and its new owners) won out.

We didn’t stop to try it on the tour, but I did try it a few days later with some new friends. To my uncultured palate, it was just chocolate cake with a bit of jam and chocolate icing. Tasty, but not particularly special. Nonetheless, I strongly suggest going once to Hotel Sacher and trying the original. If for no other reason than to say you have. The line was long, the decor is outdated, the furniture is worn out, and everything is way more expensive than it should be…but, we still had fun! Should you find yourself wanting another slice while in Vienna, you can get it at any cafe. It will taste just as good and cost half as much.

My favorite tour was of Zentralfriedhof Wien. This cemetery is a necropolis, with over 300,000,000 people laid to rest. Due to its size, it has its own dedicated city bus; it completes its rounds every half-hour. Our guide told us that there are often parties and festivals in the parking lot, and that you can purchase honey specifically sourced from the cemetery’s bee hives.

It’s no surprise that a cemetery of this size also host a few peculiarities. The most unusual is the “World Music Fans” tomb, which is being rented for 99 years by a former Japanese funeral director. It can hold up to 310 urns and it is only for Japanese fans of classical music. For a few thousand Euros, they can be buried “alongside” (or, rather, in the same general area as) several famous classical composers, including Beethoven, Strauss, and Brahms.

Like many European countries, graves are rented in Austria. Of course, some graves are preserved; no one is going to remove Beethoven or Hedy Lamarr from their final resting places. The same goes for the extensive Jewish quarter of the cemetery. Unfortunately, there doesn’t seem to be any maintenance going on over there. While the rest of the cemetery is carefully maintained, the Jewish quarter is overgrown and many of the headstones are crumbling. It’s actually quite beautiful, in an eerie sort of way. It was also the only section we saw wildlife. We saw a small hawk, a long-legged hare, and a deer.

When it comes to museums, I enjoyed the Leopold museum most of all. We went on a Thursday at 6PM, so entry was free. Currently, they have an extensive Klimt exhibit and pieces from Heidi Horten’s private collection, which includes originals by Andy Warhol, Roy Lichtenstein, and several other prominent artists.

The Vienna Museum was interesting, though it wasn’t exactly what I had expected. I thought there would be some focus on modern times, but the museum’s permanent collection ends right before World War II. The majority of the collection consists of paintings and the statues that once decorated one of the many grand cathedrals in Vienna. While I definitely found these pieces interesting, I had expected a bit more on how people lived their every day lives in modern Vienna.

One of the other tours provided by the Goethe institute was of the Rathaus (City Hall). The building itself is beautiful and quite interesting. It also contains a very old elevator elevator that is constantly in motion. There are no doors, and you have to time your entrance and exit just right. As someone with a phobia of normal old elevators, I didn’t try it out when our guide offered, but several of the other students gave it a go. I’m happy to report there were no injuries!

Perhaps even more interesting than the Rathaus, though, was what was going on behind it. Set up against the Rathausplatz is the screen and stage for the Vienna International Film Festival. This year’s festivities are from June 30th to September 2nd, and feature a wide variety of movies and live performances. Surrounding the outdoor stage are food trucks serving a wide variety of cuisine, including Mexican, Indian, and Vietnamese. There was even an American food truck with pulled pork.

We were there the night they were showing Jean-Christophe Maillot’s re-imagining of The Nutcracker. Initially, none of us thought we would stay for the entire performance; we only went for the “atmosphere,” so to speak. We ended up staying for the entire performance, though, because it was just that good. Basically, they changed it from a Christmas story to one of a ballet company that gets taken over by the most fabulous choreographer in existence. You can watch a small preview here.

Even though I didn’t make time for the zoo, I did go to the Aquarium, Haus des Meeres. I spent a really long time there, and thoroughly enjoyed my visit. However. If you are going solely for the aquatic life, you may end up very disappointed. Especially if you’ve been to some of the better aquariums in the world, like Monterey Bay.

A staple of most aquariums is a tunnel where the sharks large fish swim over you, but you won’t find that at Haus des Meeres. Even though one of the windows goes up two or three floors of the building, it’s just the one window. So, if the giant sea turtle swims out of sight, there’s no other angle to view her.

What they lack in marine life, however, they more than make up for in birds and monkeys. There are two separate rooms where small monkeys and birds of various sizes roam free. Of course, you can’t feed or touch the animals, but it makes for some great photo opportunities.

A Feel for the City

In terms of general sight-seeing, the parks are an absolute must. Entry is free, and the landscaping is immaculate. I went during a heatwave, so many of the roses were dying in the Volksgarten, but it was still lovely. Even with construction mucking up the view!

Of course, St. Stephen’s Cathedral should also be at the top of your list; you can even pay a small fee to go to the roof to take pictures.

I really enjoyed simply walking around the city and taking photos of all of the famous buildings. You don’t have to spend a lot of money to enjoy Vienna; there are plenty of things to see and do without ever paying an admission fee.

One of the most interesting things I noticed while walking around Vienna is just how clean it is. At least, in comparison to other large cities I’ve visited. There was much less graffiti in Vienna than in Germany, most of the lawns were well-maintained, and I didn’t see any litter on the ground. In Germany (at least, where I’ve lived/visited) public lawn maintenance seems to be on a “when we feel like it” schedule, whereas I saw them doing constant upkeep in Vienna.

The subway system in Vienna is really straightforward and easy to use. Each platform had every upcoming stop the train would make posted on the tunnel. So, as long as the train isn’t already at the platform, it’s easy to realize if you’re about to go in the wrong direction. It’s not all perfect, of course; some of the trains look (and function) like they were imported from communist Russia. The air conditioning was almost always broken on those trains, and the doors had to be aggressively yanked open. Sometimes, the doors simply wouldn’t open at all.

Even though I was there to learn German, I still had so much fun in Vienna. Not only with the tours and events hosted by Goethe, but also exploring on my own. Normally, by the end of a long vacation, I’m ready to go back home. By the end of my two weeks in Vienna, I realized I wanted to stay even longer. With my real vacation ahead of me, though, it was time to move on. I boarded the Nightjet to Cologne and met my husband to begin our 5-day biking tour along the Rhine, from Mainz all the way back to Cologne.