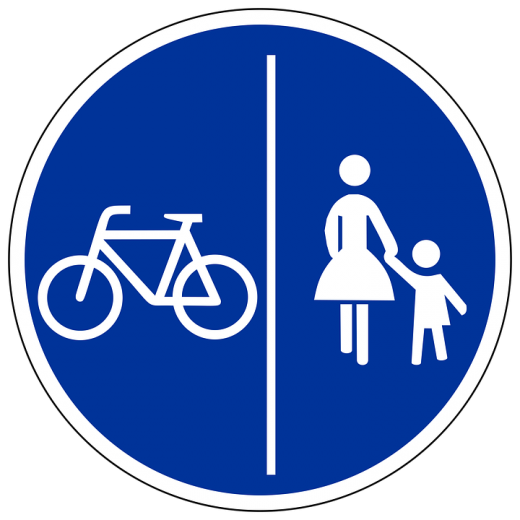 My husband and I are planning to do a bike tour of Bavaria this Summer. It’s not my first choice for a vacation, but it’s a good compromise since I want to see Bavaria and he wants to cycle. So, I’ve been “training” for at least a half hour every day, with the intention of working up to longer rides.

As I’ve mentioned previously, one of the best things about Germany is that there are plenty of pedestrian and cycling paths far away from the roads. These paths are (usually) divided; often, with a change in paving material. Even when there isn’t a clear divide, there are signs that tell you to keep to the right if you’re walking and to the left if you’re on a bike. On occasion, you will see a sign that merely states bikes are allowed on the path with pedestrians. Like good, rule-loving Germans, pedestrians tend to stay to the right even when the path isn’t clearly divided.

Then Sunday arrives, and all hell breaks loose.

Biking on a popular path on a Sunday in Germany is basically a game of Dodge’em. Is family time really family time if you’re not walking next to each other for every millisecond? Here, the answer to that question is a resounding no. Families of 5 or more walk side-by-side, spilling onto the bike path and grumbling when they have to move out of your way. IF they move out of your way. I’ve been forced onto the grass more times than I can count.

Cycling on the paths that connect the city to the surrounding small towns is far less fraught. Unless you’re near a body of water or a forest; then, you’re back to playing chicken with every pedestrian.

All complaining aside, I’m happy to be living someplace that makes this possible. Although my last three years in the US were spent in a place that actually had sidewalks, this wasn’t the case for most of my life. I grew up in rural America, where there are no pedestrian paths whatsoever. Outside of major cities and the downtown areas of smaller cities, America isn’t very walkable or bike-friendly. Cars are supposed to share the road with cyclists, but many drivers don’t seem to realize (or care) and will honk or yell at you as they pass. Perhaps this is why less than 11% of Americans walk to their destinations and a scant 1% take their bike.

It wasn’t until my mid-20’s that I started realizing how weird it was that so many people I knew would take their cars to someplace just a block away. If I saw someone walking down the side of the road, my first assumption was that they must of had car trouble. Or, that they lost their license and had no other choice but to walk. Or, perhaps, they were homeless. Whatever the reason might be, it never occurred to me that someone would willingly walk somewhere; they must have had no other choice.

As for cyclists, I don’t remember seeing one on the road until I moved to the suburbs of Detroit. I distinctly remember the first time I had a cyclist slowing me down. He was ahead of me on a one-way street I had just turned down and I was very annoyed by my inability to get around him. I was so sure that what he was doing was illegal; there was an actual sidewalk, after all. Wasn’t he supposed to be there, rather than on the road? With me? Blocking my way?!

Once I started cycling with my husband, I became the “annoying” cyclist that motorists struggle to get around on narrow roads.

There are a lot of things I miss about the USA. After friends and family, Mexican food is right at the top of my list. Driving everywhere? Not so much.