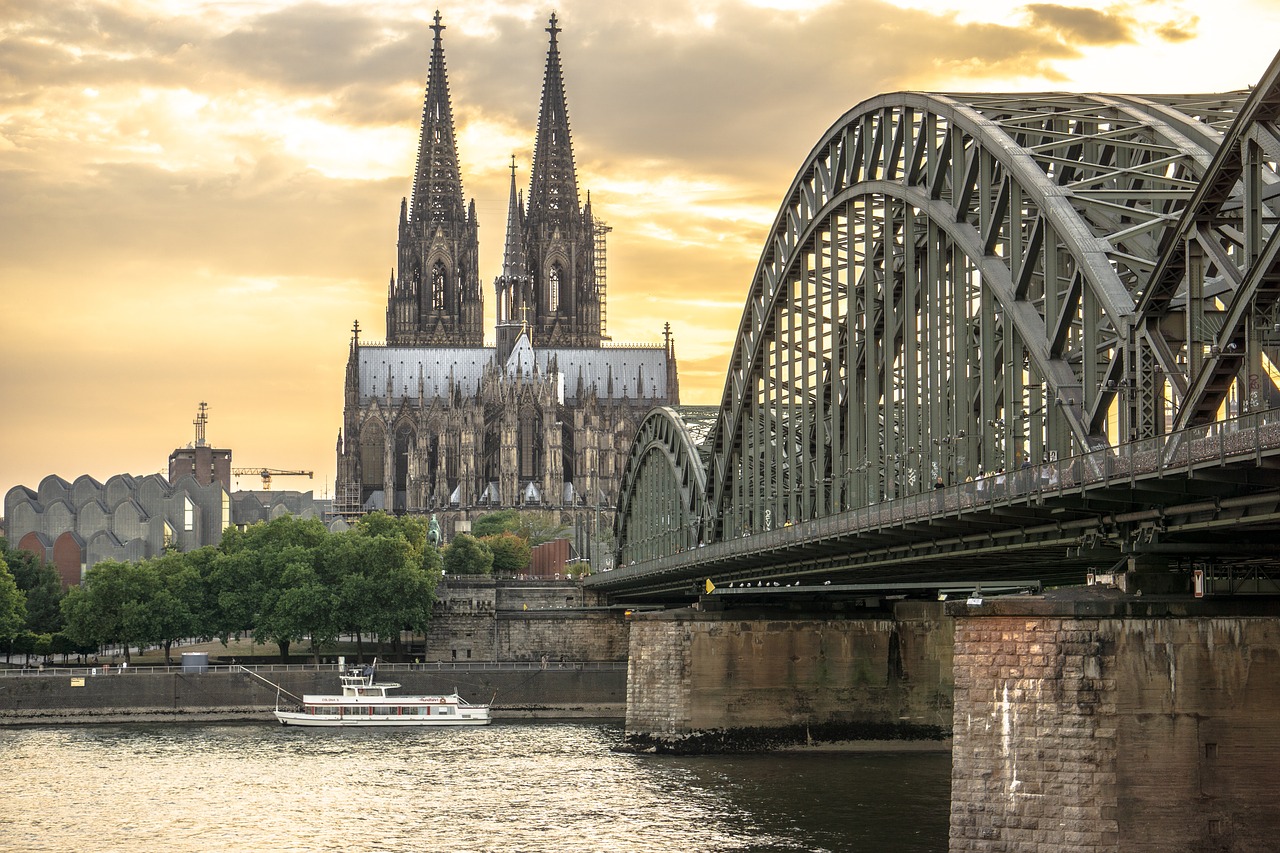 Cologne was the beginning and end of our cycling vacation this year. My husband drove from home with our bikes, and I took the NightJet all the way from Vienna. Then, we left the car in Cologne and took the train to Mainz; over the next five days, we biked at a leisurely pace back to Cologne, stopping at castles and ruins along the way. If you haven’t read about that part of our trip yet, click here.

We arrived back in Cologne late in the afternoon, and biked around the city for a while before stopping at Taqueria Especial for dinner. This is a very small Tex-Mex restaurant with a full bar and very tasty food. We shared chips and guac, and we both had enchiladas. I had the vegetarian-style, and he had his with chicken.

So, is it authentic Tex-Mex? Honestly, I can’t really say; I’ve never been to Texas. I do know it was the most familiar-tasting Tex-Mex I’ve had since moving to Germany, though. And perhaps most importantly, it didn’t taste like they replaced all the seasoning with sugar. If you’ve tried Mexican or Tex-Mex in Europe, you might have noticed that is a real issue. Well, that and using what’s very obviously Italian pasta sauce as a red sauce replacement.

So, A+ to Taqueria Especial; their food is the best Tex-Mex I’ve had since I moved.

After dinner, we cycled over to the Belgian Quarter. Unfortunately, being Germany, all of the shops were already closed for the day. It was still fun to window shop and people watch. The area definitely gave me Midtown Detroit hipster vibes; there were a lot of artsy shops, funky murals, and expensive bars with quirky names. Every other person on the street looked like an Instagram model; either perfectly done-up or the kind of effortlessly cool that actually takes a lot of effort to pull off.

Since we were already tired from the long, hot day, we gave in to our worst “we’re over 30” impulses and went to bed early. Well, we tried to, anyway; our AirBnB neighbors were having dinner on their balcony. They were speaking very quietly, but because they were right next to our window, we could hear every word of their conversation. Impressively, they stayed on the same topics (clothes and boys) for at least an hour; perhaps longer, though I’ll never know, as I managed to fall asleep. Who needs real earplugs when you have tissue paper?

The next day was our only full day in Cologne, so we tried to do as much as possible. After a quick coffee and croissant, we went to the Cologne Cathedral (Kölner Dom) to climb to the top of the main tower.

In the name of safety, the viewing area is fenced in; understandable, but the weave is so tight that it’s very difficult to take pictures. I did manage to take a few by shoving my phone through the fence, all the while suffering serious side-eye from my husband.

So if you’re only going up for pictures, I’d say skip the climb. But, if you don’t need photographic evidence, or if you just want to say you did it, then by all means; get on up. I strongly suggest going early, though; we were done by 9:30 A.M. and it was already getting busy during our descent. If you hate tight spaces and big crowds, you’re going to have a bad time.

Although there’s a charge to climb to the top of the spire, there’s no charge to explore the rest of the church. So even if you’re not keen on the climb, you should check out the main part of the Cologne Cathedral. During our visit, they were having mass in a small, closed-off corner. I stopped for a while to listen to the singing; instead of a choir, it was a single male vocalist. I’m not sure if it was the priest, or someone else; either way, it was lovely. It was also amusing to watch the priest that was presumably tasked with keeping tourists away from the mass, sitting off to the side, grinning while texting on his phone.

The cathedral is very dark inside, which makes the stained glass truly stand out. You can also go downstairs, into the crypts; an area that many other churches keep closed off from the public. Among the usual artifacts and old art pieces you’ll find in any old European church or cathedral, you will also find an…interesting…mural.

We left our bikes parked near the church and, after walking around the main shopping area for a bit, made our way to Wurstbraterei. This food stand is known throughout Germany because it’s featured in nearly every Cologne episode of Tatort. For those who don’t know, Tatort is the longest-running and most popular TV show in Germany. What makes it unique is that every major city in Germany films their own episodes. Not to be left out, Austria and Switzerland film their own as well. Although I’m not a big fan of Tatort (I don’t like crime shows in general; they’re too predictable and cheesy) I can tolerate episodes from Cologne and Münster. My husband’s favorite Tatort episodes come from Cologne; naturally, that meant we had to visit the Wurstbraterei.

At the end of each Cologne Tatort, the two investigators grab a sausage and some fries at this food stand. When used for filming, it’s moved across the river so that the backdrop is the Cologne Cathedral. Ordinarily, though, they’re both on the same side of the river.

Although they were opening up in fifteen minutes, we didn’t stay and have lunch there; mainly because the only vegetarian option is the fries. We walked back towards the downtown area, and our bikes, and picked up some cheap food along the way. We ate on the bench of a nearby church, and then walked over to Museum Ludwig, Cologne’s largest modern art museum.

Ordinarily, I’m the first person to express my dislike of all modern art. That’s not an entirely true statement, though; after all, I like pop art, and that’s definitely modern. So, what I really mean is that I hate most modern art; in particular, the ultra-pretentious stuff that looks like something a child could have slapped together during a sugar bender. Yet, I really enjoyed the Leopold Museum in Vienna; so, I decided I might as well see if I could go two for two.

Initially, I wasn’t very impressed. We started with their temporary exhibit by a Korean artist named Haegue Yang. She and her work are basically the embodiment of everything I hate about modern art. Most of it is pretentious nonsense, right down to a piece I’m sure every art student has thought up at some point: a clock with the numbers rearranged. There are a few interesting pieces, though, including one adorable sculpture that looks like an alpaca, some beautifully-intricate posters made of advertisement clippings, and a room full of window blinds and strategically placed lighting.

Happily, I thoroughly enjoyed the rest of the museum. If you’re a big fan of Picasso, they have an extensive collection of his paintings and sculptures. I’ve never held much love for his work, so I didn’t linger in this section for very long. I was, however, impressed with their pop art exhibit.

After the museum, we went back out into the heat and finally retrieved our bikes. Our next stop was the studio where they film Jan’s favorite TV show, Neo Magazine Royale. This is a comedy program that also covers the big news stories of the week. It’s hosted by Jan Böhmermann, a comedian best-known internationally for his raunchy poem about Turkish president Recep Tayyip Erdoğan. You can watch an English-language interview with him here, where he discusses the poem and its impact.

We only had a quick look at the studio; mainly because that’s all we could do, since it’s (obviously) not open to visitors. Jan was content to snap a quick photo, and then he said he had a “surprise” for me. Since we went through the city’s cemetery to get to the studio, I knew it could be only one other place: an animal park.

Sure enough, that’s exactly where we went! We cycled to the Lindenthaler Tierpark, which is similar to the one we visited in Düsseldorf. This park sells animal feed, though, which means it has a slight advantage. Unfortunately, the machines were set to a daily limit, and we didn’t find one that would give us food until we were just about to leave. By then, there were no more deer in sight; only hundreds and hundreds of goats, some cows and a few donkeys. There are also a lot of birds, including fancy roosters, turkeys, ducks, and some wild-eyed geese.

After giving half of my pellet pack to a very insistent goat, I washed my hands and then we headed back to the downtown area, in search of dinner.

I wish I could say dinner was good, but it was sadly quite disappointing. Too hungry to check reviews, we stopped at the closest restaurant with outdoor seating. While the Kölsch beer was good (much better than the Altbier of Düsseldorf), the food was not. I’m not going to go into details, since I can’t even remember the name of the place; just let this serve as a warning, ye travelers to Cologne: always check the reviews.

Our last stop was Frieda, a punk rock bar my husband picked out because their sign was a cute dog, and he knew I’d like that. I sure did! As it was still relatively early, the bar was nearly empty. The music was good and our beers were fairly priced. The bar is also plastered with far-left stickers, which gave it a welcoming aura. After all, there’s nothing like seeing “nazis raus” to make you feel like you’re in good company.

So that’s Cologne! I definitely liked it better than Düsseldorf, and I’d be happy to visit again. There’s definitely more to explore, eat, and drink.