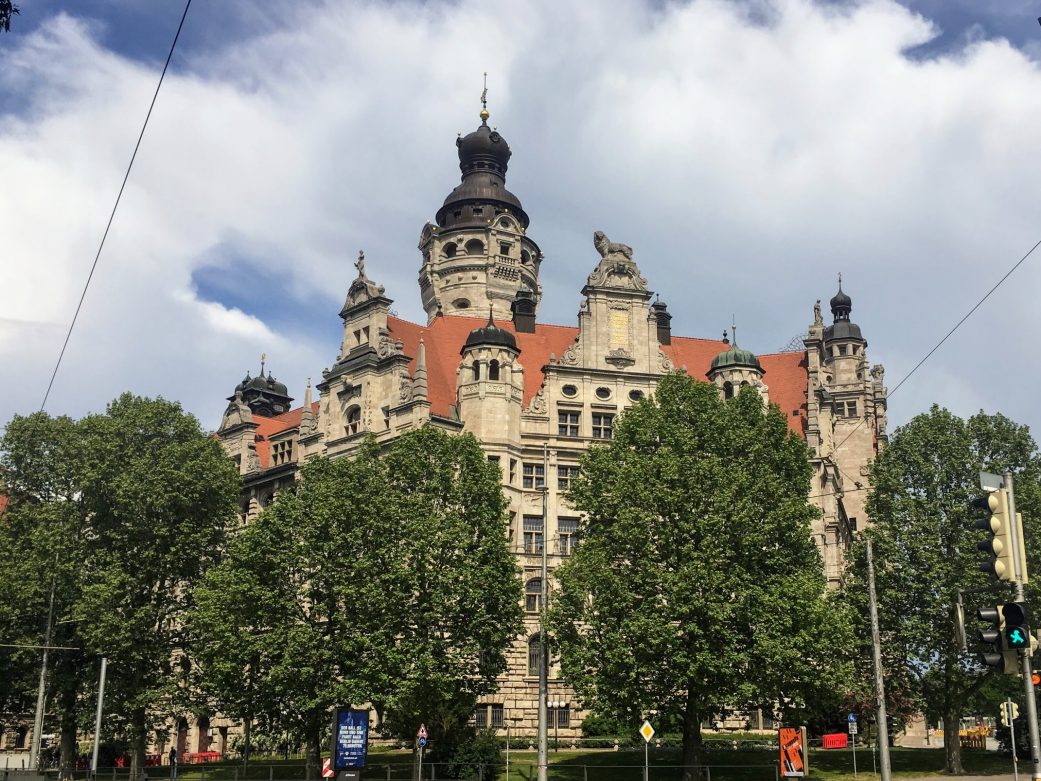 A few weeks ago, we spent a long weekend in Leipzig, Germany. My husband wanted to go to Hamburg, but since we were already there in 2015, I picked Leipzig instead. Don’t get me wrong, Hamburg is great; I think it might be my favorite German city. I want to see as much of Germany as possible, though; so, if I picked a place I hadn’t been yet. Technically, we were in Leipzig last December for the Chaos Communication Conference. I don’t think it counts, though, since we spent the entire time in the conference center.

Our first day in Leipzig was during Himmelfahrt. Since holidays are treated like Sundays here, we couldn’t do any shopping. Thankfully, restaurants, cafes, museums and the zoo were open. After walking around the city for a bit, we went to the Zeitgeschichtliches Forum. This free art museum (though you should donate before you leave) is dedicated to keeping a visual record of modern German history.

Their permanent gallery was closed, but the temporary exhibit on design ideals of the GDR was open.

The government of the GDR had control over every aspect of the lives of their citizens. Design, and what should be considered “good” design, was no exception. Illustrative of this was the description of two beautiful black vases. Initially, the vases were very popular; then, they fell out of favor after the government deemed them against socialist values. Why? Well, black is such a dreary color and communists are always happy, of course!

The exhibit also included a section on Mosaik comics and the Didedags. Travel for Germans in the GDR was limited to other countries behind the Iron Curtain. These comics gave readers the chance to live vicariously through the heroes as they adventured around the world. The comic managed to fit in history and science lessons in every issue. They even had a special issue about America during the Civil War, in which the Didedags’ help the abolitionists.

Personally, I found this to be the most interesting piece on display.

It’s a homemade tilling machine made from the engine of a motorcycle, bike chains, and other salvaged parts. With limited resources, most citizens of the GDR had to get creative. Since they couldn’t buy a tilling machine in the store, they made one themselves.

On the second day, we went to the Leipzig Zoo. It’s one of the most modern zoos in Europe, and includes the world’s second-largest indoor rain forest hall. I was really impressed by the collection of various species, and how nice all of their enclosures were. Every animal had enrichment activities and toys to keep them happy and active. They even have a “cave” with very low lighting, for their collection of nocturnal species. Not great for pictures, but definitely great for the animals.

For the first half of our third and final day, we went on a paddling tour. I didn’t have my seat properly adjusted for the first half of the trip, so my arms were aching mere minutes into the excursion. Thankfully, my husband realized I needed to move my seat forward…by a lot. Ah, the joys of being short! The trip was a lot more pleasant after I wasn’t leaning back like a 90’s rapper in his Cadillac.

After paddling, we spent the rest of the day shopping. The mall we went to was huge and, according to a friend, there’s an even bigger mall we missed entirely. Of course, the entire downtown area is peppered with smaller stores as well. If you’re in need of new clothes, and about to take a vacation somewhere in Germany, Leipzig might be your ideal destination.

I would be remiss not to mention all of the great food and drink we had during our stay. The highlight was Cliff’s Brauwerk, an impressive little microbrewery that offers a limited, but always changing, selection of beers. We had the IPA and the red, and they were both delicious.

I also really liked a cafeteria-style place called Food Kurt. Mainly because of the name, but also because their happy hour deal is really good and the service is friendly.

That was surprisingly a running theme in Leipzig; almost every server we had was cheerful and helpful. Service in German restaurants often feels very practical; the server is just there to get the job done. That wasn’t the case in Leipzig, and it was a refreshing change.

Case in point: the restaurant Hans im Glück. First of all, the food is really good. What made this particular visit extra noteworthy, though, was the waiter who made sure we got the lunch deal so our bill would be lower and include two extra hot drinks. We had technically arrived past their designated lunch time, but he still gave us the deal without us even asking.

Since it’s a chain, you don’t necessarily have to go all the way to Leipzig to give Hans im Glück a try. If you ever find yourself in Germany, check and see if there’s one nearby.

I had a lot of fun in Leipzig over the holiday break. It felt like we saw so much of the city, yet there’s still a lot we missed. All the more reason, of course, to eventually come back for another visit.