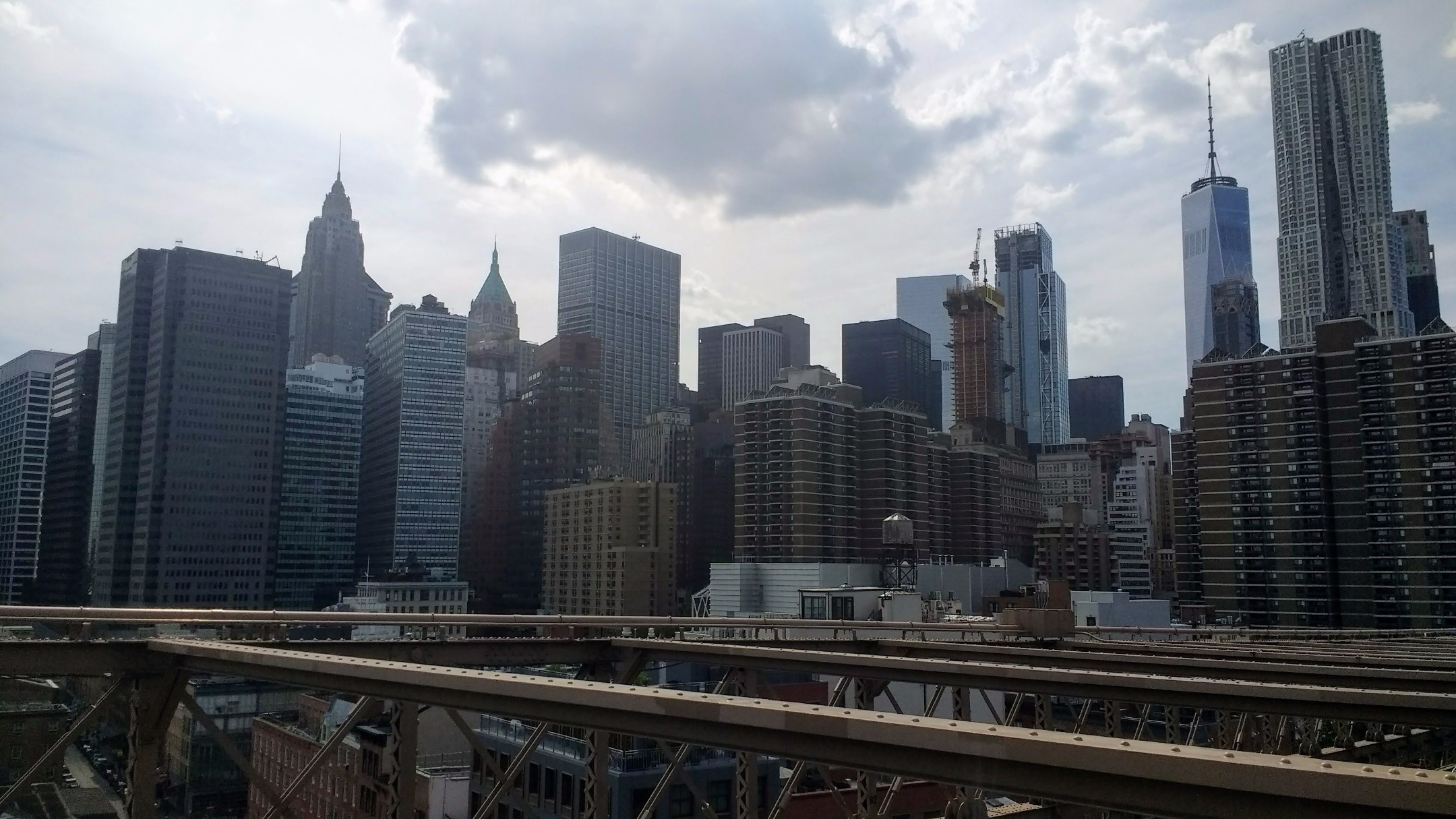 View of the city from the Brooklyn Bridge.

I feel like a broken record saying this, but: it’s been a while, hasn’t it? A lot has happened since my last update! Up until two weeks ago, my husband and I were extremely busy planning for our move to Germany. It’s been stressful, but I’m very happy to say that the hard part of getting documents, moving logistics, and goodbye parties in order are over. We are now officially in Germany! We’ve been here nearly two weeks now, and although I still have some adjusting to do (and German to learn) I am very excited to be here. Soon, I’ll be regaling you weekly with a bit of schadenfreude, as this blog becomes less travel (for now) and more “here are some awkward situations I’ve gotten myself into while getting used to my new country.”

Before all that, though, I want to tell you about the short vacation to New York that we took in between handing over our U.S. apartment, and flying to our new home.

Our AirBnB was in the Bronx, and close to the subway, which was really convenient. What wasn’t convenient was the stifling heat. We had the misfortune of coming to New York during a heatwave, and maybe this is just my Midwestern inexperience talking, but I don’t think a subway station is supposed to be so effing hot! It felt like we were waiting under heating lamps while breathing some truly vintage air. Yuck.

Thankfully, that is my one and only complaint about the trip. Everything else was great, and even though I’m pretty sure I lost my body weight in sweat every single day, it was all worthwhile.

We didn’t have a lot of time our first day, so we explored the area around Rockefeller Center, gawked at the people taking happy photos around Trump Tower, and had a very brief look at Times Square.

At some point we ducked into the Hard Rock Cafe for the air conditioning, where I found this gem:

We spent the morning of our second day walking around Manhattan, the High Line, and the Financial District.

Around Noon, we took the ferry to Staten Island just to eat at Enoteca Maria. This restaurant’s claim to fame is inviting nonnas (grandmas) from around the world to cook dinner in their kitchen. We went there for lunch, so there was nary a nonna in sight, but the food was still exceptional; easily, the best meal we had during this entire mini-vacation.

We took the ferry back to NYC right after lunch, and then walked over the bridge into Brooklyn.

What I think really surprised me most about NYC and Brooklyn, besides the stifling subway stations, was how early breweries closed. We have a lot of breweries and brewpubs in Michigan, and most of them stay open as late as any bar. I’m grateful we made it in time to try out the Brooklyn Brewery, but I was pretty bummed to not have the time to visit the Bronx Brewery, which is only open until 8PM at the latest.

Our third day was pretty busy; we went to Grand Central Terminal, both the Chelsea and Brooklyn locations of the Artists and Fleas market, Smorgasburg, and managed to fit in time for my two main New York food goals: cheesecake and pizza. The cheesecake was from Eileen’s Special Cheesecake, and it has truly earned every single one of its positive reviews; it’s creamy, delicious, and the fruit topping is fresh and vibrant.

The pizza from Lombardi’s, on the other hand…well, it was OK. Lombardi’s claims to be not just the oldest pizzeria in New York, but in the entire US. I know that doesn’t necessarily guarantee a great pizza, but I expected better from a small pizza that cost over $30. Let’s just say I’ve had better (and less soggy) pizza from local takeout places in Michigan. Not to mention way better service, but that’s another matter entirely.

Thankfully, the day ended on a great note at Paulaner NYC.  My husband spoke briefly to the owner, who told him that he has permission from Paulaner in Germany to brew right there in NYC and use the Paulaner name. The beer was great, and you can try all five if you get the flight, so please do!

For our fourth day, I went to the Natural History Museum and Jan went off to explore more of the city and take pictures. I’m usually not one for animal displays; I’d much rather see them in the wild or in a zoo. Seeing a dead, stuffed animal (or straight-up fake? I’m honestly not sure; if someone knows, let me know in the comments!) However, this museum does a great job with those exhibits. The details in most of the backgrounds are quite impressive.

My favorite exhibits were the fossils and the Hall of Mexico and Latin America. I never grew out of my childhood love and fascination with dinosaurs, and the collection of complete skeletons they have is easily the largest I’ve ever seen. The Hall of Mexico and Latin America had the most beautiful and interesting artifacts in the museum’s Human Origins and Culture collections; a designation hard-won, as all of the world history areas are full of beautiful cultural items.

My husband and I met back up later that evening near China Town and Little Italy, and walked around for a bit before having dinner and then checking out a very small bar called Old Man Hustle. They were having an amateur comic show/open mic night and I wanted to check it out, because the reviews were so good. It turned out the reviews were good because the comics and bartenders were reviewing the place, but honestly, that just makes me like the place even more; that’s hilariously ballsy. The comedy was about what you would expect from an amateur show, with one really stand-out comedian that I definitely hope to hear more from in the future. The show was entertaining, the drinks were good, and everyone was super friendly; if you’ve never been, please check it out.

Our last day was the best day! We took about fifteen minutes to explore St. Patrick’s Cathedral…

another fifteen to check out the Nintendo store…

and then…we got in line for Stephen Colbert! The wait was long, but it was so worth it; we were in the second row! You can even see us twice when they show the audience, if you know where to look.

Jon Stewart and Stephen Colbert are childhood heroes of mine; the only thing that would have made this better is if we had been there for the Daily Show reunion episode that Colbert did a month or two ago. I’m not even a little embarrassed to admit that I had to choke back some tears when he came out on stage. He was every bit as funny, charming and entertaining as I expected him to be, and more. I am so grateful we were able to get tickets to see the show, but I don’t think I’d want to go again for a long time, even if the opportunity came up; the amount of energy they want you to put in as an audience member is understandable, but it’s exhausting!

We had a great time in New York, and I hope we have the opportunity to go back sometime in the next few years. We saw only a small portion of New York and Brooklyn, and next time I would like to explore Queens and The Bronx a bit more.

I’ll end with a few more pictures of street art we came across during the span of our trip, including one fabulous, shimmering manicorn mural.