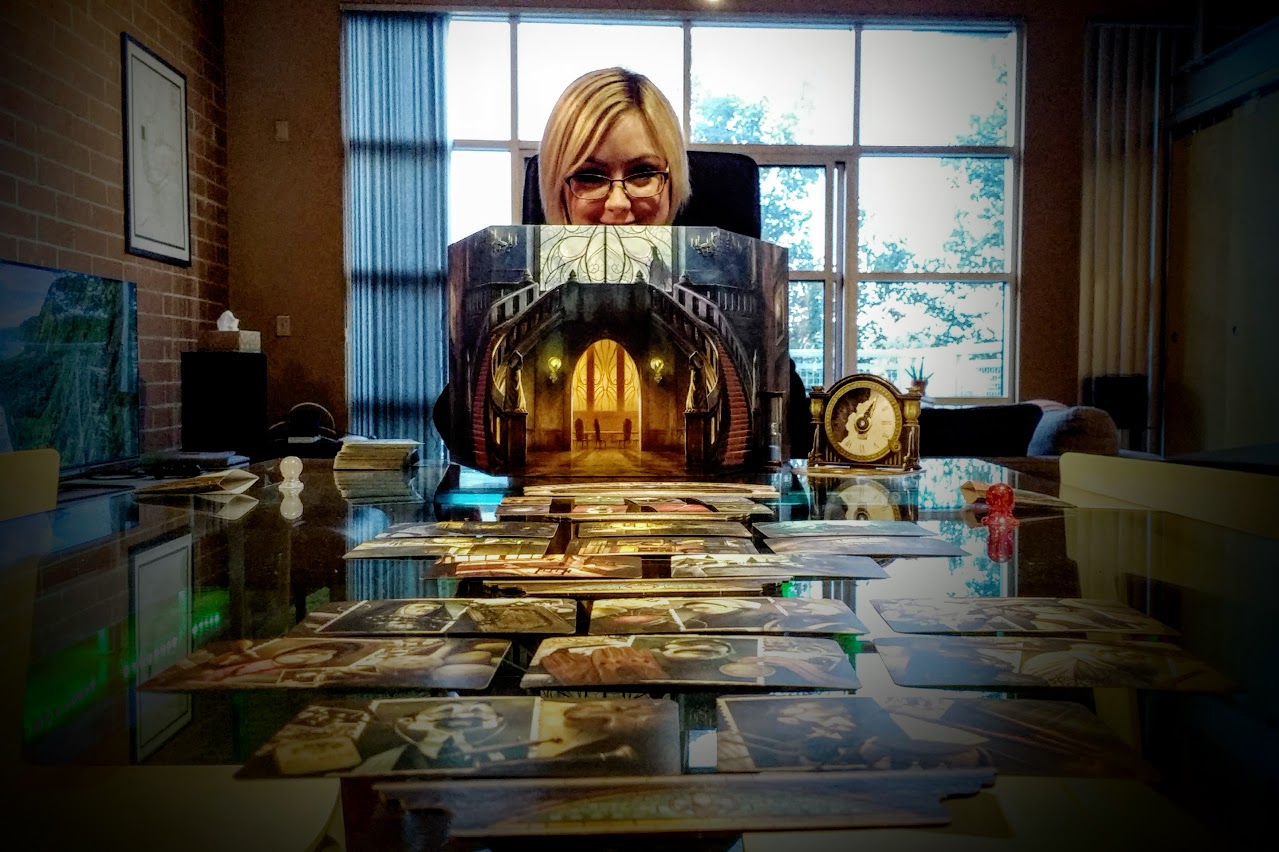 This past Saturday, my boyfriend and I had some friends over for a “spooky” board game night to kick off the month of October, AKA the most wonderful time of the year. The main attraction of the night was Mysterium, a cooperative, vaguely Clue-like game set in a haunted mansion. The premise of the game is that you are psychics (up to six) that have been called to a mansion to solve a 30-year-old murder. The ghost is still traumatized by his death after all these years, and so his memory of the night is muddled; he has a different story for each psychic.

The ghost’s job is use cards of abstract pictures (vision cards) to lead each psychic to choose the correct person, place, and object for their individual scenario.

At the end, once everyone has figured out their own individual stories, the psychics will work together to break through to the other side, and discover which scenario is the truth. So long as the majority of the psychics guess the correct scenario, everyone wins; if not, the ghost remains restless, as his death goes unsolved.

Mysterium is a really fun game; so much so that we ran it twice, so that everyone who wanted to play could get a chance. Playing the ghost or a psychic each presents a unique set of challenges.

As the ghost, you have a fairly high stack of vision cards, but you can only have seven in your hand at the time. This becomes a challenge when none of the cards you have seem even tangentially related to the person, place, or thing that you’re trying to lead each individual psychic towards.

One example: I was trying to lead one of my psychics towards his scenario’s object, which was a fork. I had no cards with a fork on them, but I did have a few with sharp objects, as well as one with a dinner plate. The other psychics, as this is a cooperative game, led him towards the frying pan instead, because they saw round objects in his cards. It took at least two incorrect guesses before he finally chose the fork.

The tables were turned during the second run of the game, when I played one of the psychics. My boyfriend was playing the ghost, and he handed me a card that was a picture of pillows with bullseyes painted on them, and arrows through each center. I assumed he was guiding me towards the hunter as my suspect. It turned out, however, that he was guiding me towards the seamstress, who had a pincushion on her character card.

Overall, Mysterium is a really great game that is just the right mix of challenge and fun. I highly recommend picking it up if you tend to have people over for game nights. I bought my copy from a great local board game shop, but if money is tight and you don’t need the game right away, Amazon seems to consistently sell it for about $10 to $15 cheaper than retail.

This website uses cookies to improve your experience while you navigate through the website. Out of these, the cookies that are categorized as necessary are stored on your browser as they are essential for the working of basic functionalities of the website. We also use third-party cookies that help us analyze and understand how you use this website. These cookies will be stored in your browser only with your consent. You also have the option to opt-out of these cookies. But opting out of some of these cookies may affect your browsing experience.
Necessary Always Enabled
Necessary cookies are absolutely essential for the website to function properly. These cookies ensure basic functionalities and security features of the website, anonymously.
Functional
Functional cookies help to perform certain functionalities like sharing the content of the website on social media platforms, collect feedbacks, and other third-party features.
Performance
Performance cookies are used to understand and analyze the key performance indexes of the website which helps in delivering a better user experience for the visitors.
Analytics
Analytical cookies are used to understand how visitors interact with the website. These cookies help provide information on metrics the number of visitors, bounce rate, traffic source, etc.
Advertisement
Advertisement cookies are used to provide visitors with relevant ads and marketing campaigns. These cookies track visitors across websites and collect information to provide customized ads.
Others
Other uncategorized cookies are those that are being analyzed and have not been classified into a category as yet.
SAVE & ACCEPT
%d bloggers like this: