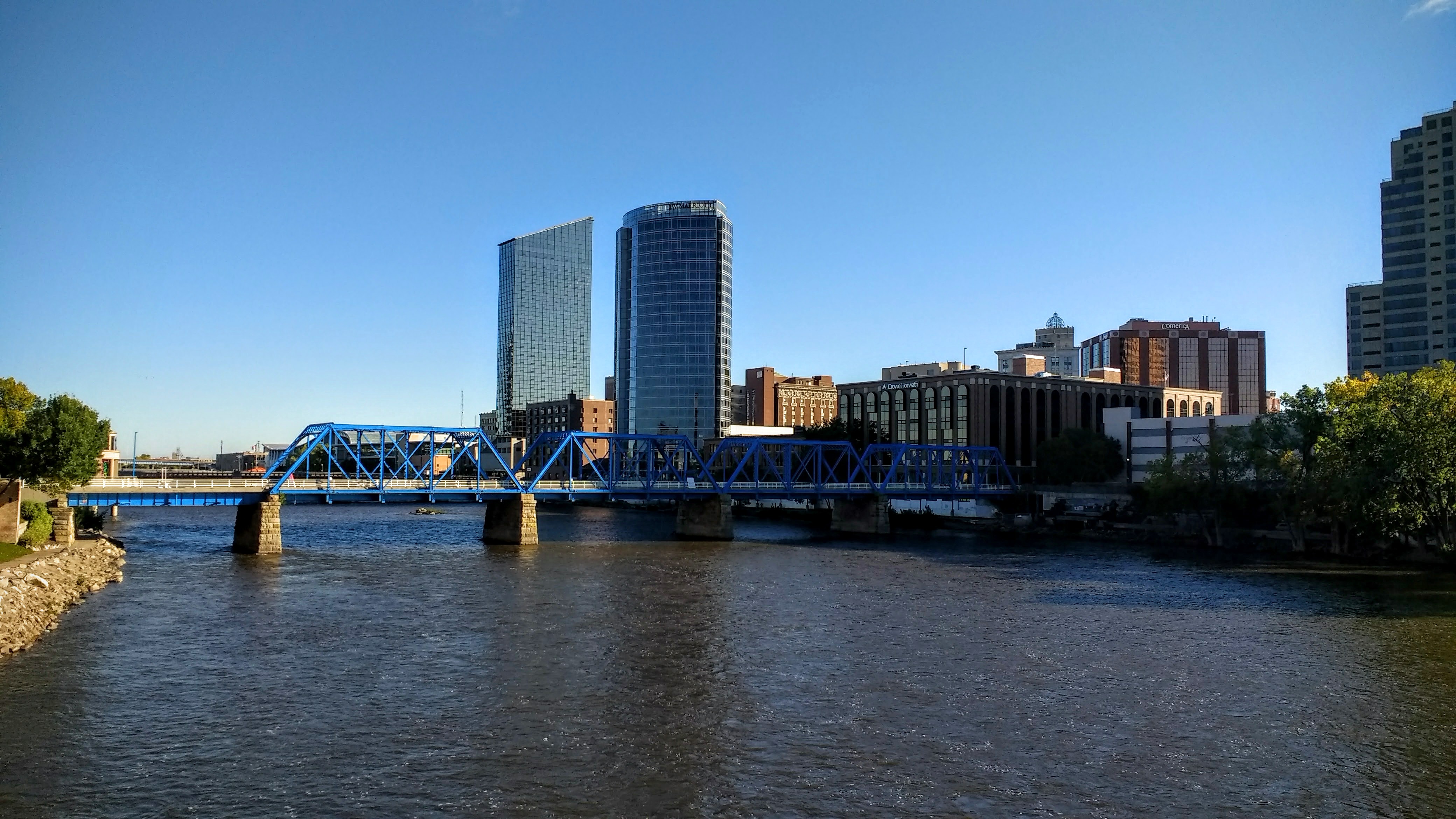 Jan and I spent this past weekend in Grand Rapids, Michigan with some friends who were already in the area to attend GrrCon. Coincidentally, the conference coincided with the tail end of Art Prize, a massive, yearly art festival that lasts two months and brings together artists from all over the world.

Art Prize is free to attend and set up all across the city of Grand Rapids. The majority of businesses and organizations participate, allowing artists to set up their paintings, sculptures, mixed media artwork, performance pieces, etc. in and outside of their buildings.

The bed and breakfast we were staying in, Peaches, was also participating in Art Prize. I would highly recommend staying there if you are in the Grand Rapids area. It’s obviously a very old home; it is in the historic homes district, after all. Often, one of the major drawbacks of staying in an older establishment is the feeling that things aren’t as clean as they should be, or that nothing has been updated. Peaches was extremely clean, and struck a nice balance between evoking the golden era of this house, while keeping things updated where it matters most.

Our room, and some of the art featured at the Inn

This was my first time not only in Grand Rapids, but also to the West side of the state. Grand Rapids ranks 3rd in the country for economic growth, and is the fastest-growing metro area in all of Michigan. It was also extremely walkable, which often feels like a rarity outside of major US Cities like New York and L.A.

The first night we were there, we ate at San Chez in the downtown area. This was a really nice (and popular, judging by the amount of people waiting) tapas place with generous portions. The tapas restaurants we’ve been to in Detroit and the metro area generally only give you enough food for two people, per plate. San Chez served enough for four people, resulting in Jan and I ordering more food than we should have. Thankfully, I had plenty of room since I skipped lunch that day; the food was delicious.

We headed over to the Grand Rapids Brewing Company after dinner, to close the night on a truly Grand Rapids note. The city prides itself on the amount of breweries in their city, going so far as to call itself “Beer City, USA.” As for this brewery in particular, I tried their two entries in Art Prize, Ursa Major and Ursa Minor. Ursa Major was a nitro honey chocolate porter and Ursa Minor was a blueberry blonde. If you have an easy opportunity to try them before they’re gone I would definitely say go for it, but there’s no need to go out of your way; they were very good, but not particularly unique.

We spent the next day walking around Grand Rapids, and enjoying Art Prize. I didn’t take too many pictures of the art, but if you’re interested in attending next year and want to get an idea of what is typically on display, you should check out their website.

A very small selection of the art, and one very talented juggler

For dinner, we walked to Brewery Vivant. I have mixed feelings about this place. On the plus side, the food was amazing and the service was fast and friendly. The problem we had was with the drinks, which is not something I should ever have to say about a brewery. Three of us tried the Undertaker, which was supposed to be a Belgian-style dark ale with coffee, cherry, and dark chocolate notes. The only note the three of us could detect, however, was stale coffee. One of our friends also remarked that her cider tasted like a beer, and that there was no blueberry taste whatsoever; a real problem, since it was a blueberry cider.

After dinner, we took a quick Uber over to Founders Brewing Co. The service was pretty bad at first, but ended up turning around. As usual, their beer was outstanding. It was nice to finally visit the brewery behind some of my favorite six packs.

On Sunday, we did a kayaking trip before heading back home. The organizer was extremely well-prepared and friendly. He picked us up from outside the bed and breakfast, and brought us back. He also took pictures of our trip, meeting us every few miles along the river to take pictures. They weren’t the highest quality, but it was a really nice gesture and much appreciated.

If you’re in the Grand Rapids area between April and October, and you’re interested in kayaking, I recommend booking with GR Paddling. They will supply you with everything you need (and everything you didn’t even realize you would need, like waterproof casing for your phone), minus the water-proof clothes. We picked the most difficult tour. Despite the fact that this was my first kayaking trip, it turned out to be just the right amount of challenge, while still remaining enjoyable for our seasoned paddlers.

Overall, this was a great little weekend getaway, and I’m looking forward to another trip to Grand Rapids next year.