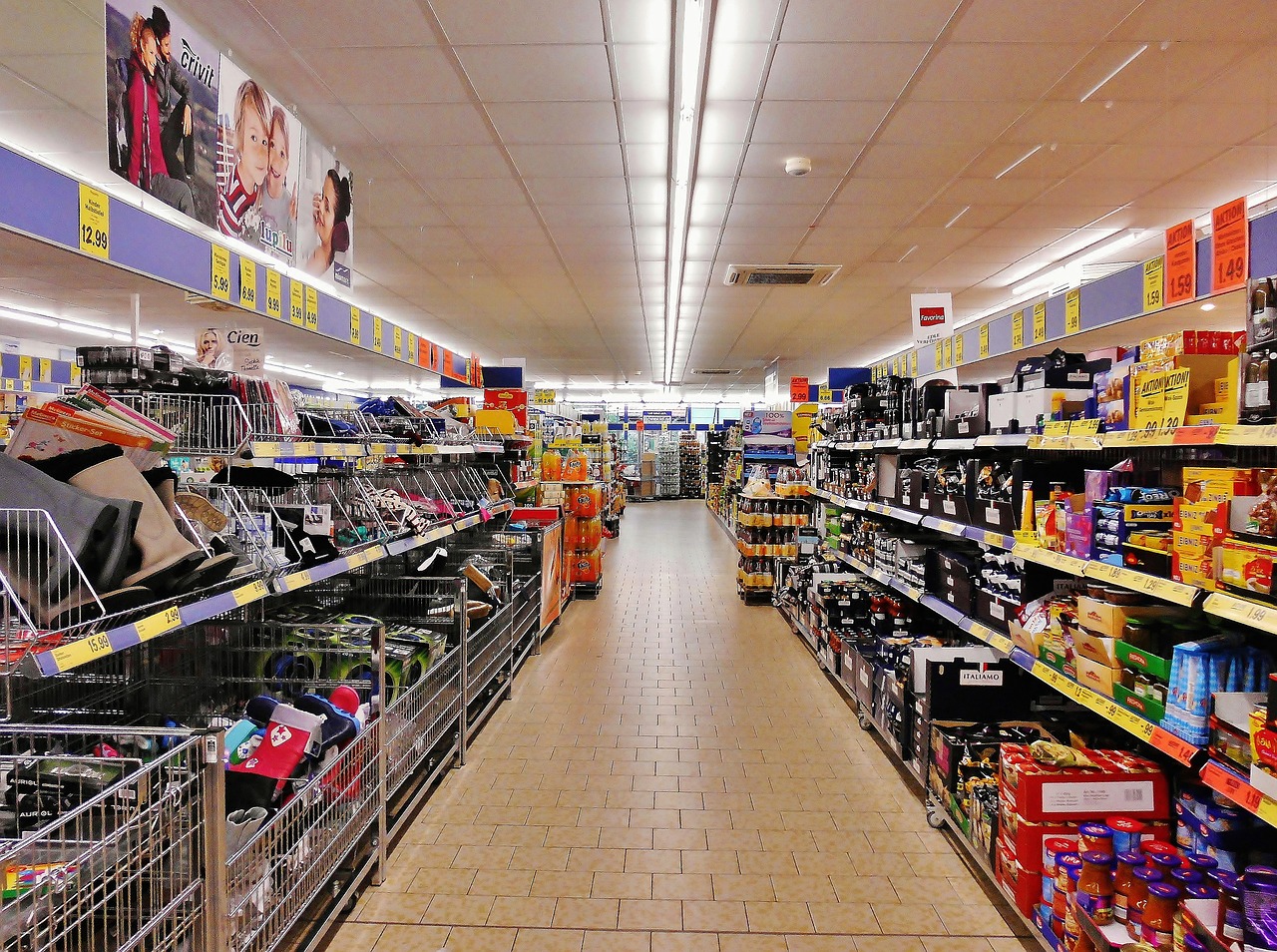 At first glance, supermarkets in Germany appear quite similar to their American counterparts. Grocery stores like Real and Rewe look just like any Kroger or Meijer back in my home state of Michigan. Aldi looks a lot like, well…Aldi. Sure, sometimes the layout may be a bit different, but it’s basically the same, right?

In many ways, yes. There are some key differences between American and German supermarkets, though, that are worth noting if you’re planning to stay here longer than a week.

Germany has some of the most restrictive shopping hours in the world. Although they’ve been slowly loosening these laws since 2006, you still can’t do your grocery shopping on Sundays. In fact, you can’t do any shopping on Sundays. There are a few exceptions, like little corner stores or shops in train stations, but they’re few and far between.

Not only are supermarkets closed on Sundays, they also have limited hours on the days they are open. Big stores like Real stay open until Midnight, but your average supermarket here closes at 10 p.m. at the latest. The discount shops like Aldi and Lidl close even earlier, at 8 p.m.

Contrast the above with the US, where many large supermarkets are open 24/7. Even small grocery stores typically stay open until at least Midnight.

The lesson? Plan your grocery shopping accordingly if you’re going to be in Germany long-term. There’s no running to the store on Sunday to get the eggs you forgot.

Other than a few “high-end” stores like Edeka, shopping carts in Germany require a 50c. to €1 deposit. Or, you can buy a cute key chain (like mine above) with a reusable “coin” to use instead!

Thanks to this system, I’ve never seen a rogue shopping cart in the middle of a German store’s parking lot. American stores should really start implementing this system as well, to combat the lazy Americans who just leave their cart in the empty parking spot next to their car.

I’m from Michigan, which is one of the few states (there are only 11!) with bottle deposit. If you’re from one of the 39 other states without it, and you’re used to just throwing away your cans and bottles, don’t do that in Germany. All bottles, including large water bottles, have a deposit; some, up to 25c. If you have empties, the bottle return should be your first stop before any trip to a German supermarket. You can apply the refund (pfand) to your grocery bill.

Milk and Eggs on Shelves

If you’re new to Germany (or anywhere in the European Union, really) this may come as a shock. How are people not getting sick? It all has to do with different regulations.

Eggs have a natural coating that protects the inside and keeps bacteria from growing on the shells. The European Union requires that eggs not be washed, so they can retain this coating. That’s why you might find some not-so-nice extras with your eggs in Germany, from feathers to questionable brown “stuff”. You can (and should) just wash it off before cracking the egg.

In America, eggs are washed, sprayed with a sanitizing solution, and dried before ever reaching the supermarket. This process removes the natural coating, which means they need to be refrigerated.

Shelf-stable milk does exist in American supermarkets, but it’s hard to find and not exactly popular; perhaps, due in part to fears that milk must be refrigerated. So how does the shelf-stable milk here in Germany work? Well, it’s simple; it’s pasteurized at a much higher temperature and the packaging keeps out light, air, and harmful bacteria. Of course, once opened, you need to put it in the fridge.

A small, but notable difference is that many items for baking in Germany come in tiny, single-use paper packets, called päckchen. In the US, baking powder and baking soda come in large cardboard or plastic containers that have multiple servings.

You’re not going to find cream of tartar (substitute lemon juice at a 1:1 ratio) or brown sugar with molases here, either. You will find a type of brown sugar, yes, but it’s not the same.

Meanwhile, in America, German expats often complain about a lack of quark in the US.

Outside of the day before Thanksgiving, I can’t recall a single time I’ve seen empty spaces in American grocery store shelves. In Germany, I see it quite often. If something runs out, it’s out until they get more in to restock. In America, it’s refilled almost immediately; either with the product, or something else.

Likewise, the selection of produce in Germany is limited in most grocery stores. Often, I’ve had to go to two or three different stores (sometimes the same chain) to get everything I need, even for basic meals. If you go to big supermarkets like Real, this is much less likely to happen, but it still can. There have been times, for instance, where the Real didn’t have broccoli or eggplant.

Does it have to do with the season? Maybe; I honestly don’t know. I’m used to big American grocery stores always having a full stock of almost everything you could want. Only farmers’ markets in the US emphasize “seasonal” produce.

As someone who’s volunteered for a food rescue organization, I can tell you that American grocery stores waste a lot of food. If limiting their selection is one of the ways German stores reduce food waste, then I’ll happily accept the slight inconvenience.

Unless it’s a discount store or in a mall, most German supermarkets have a small bakery operating near their entrance. They will also have an area with packaged bakery bread, similar to what you might see in a US store near the deli department. The difference is that there’s more variety and the quality is much higher. There’s also the usual bread aisle with packaged and pre-sliced bread, “American” sandwich bread, toast, pita, tortilla wraps, and tons of pre-packaged cakes and sweets.

High-quality bread is very easy to find in Germany and it’s much cheaper than in America. When it comes to baked goods, Germany has most of the world beat; not just America.

One of the most unique things about German supermarkets is the rotating selection of non-food items. These items change every week, and are almost always from a brand called Tchibo.

Tchibo is mainly a coffee retailer, but they branched out into selling other items at some point. My husband swears the products are high-quality, but I’ve yet to be convinced; at least, when it comes to their clothes. I definitely like the other Tchibo items we’ve purchased, like our bread container and clothes pins.

Discount grocery stores like Lidl and Aldi also have a rotating selection of non-food items. They vary in brand and quality. Occasionally, you can find quality items at a deep discount, like brand name tools from Bosch. These items run out very fast, so it’s advisable to check the store’s ads ahead of time, so you can plan what you want to buy.

The checkout lane is an experience if you’re accustomed to American grocery stores.

You will need to bring your own bags, or pay for them at the checkout counter. If you need to buy bags, they’re typically under the conveyor belt, but sometimes they’re next to the cashier.

Once you’re in your forever-lane, don’t forget to use the dividers! And don’t fret too much if the other customers stand too close. Germans don’t seem to care as much about personal space as Americans do. Sure, it’s uncomfortable at first, but eventually you just shut down mentally and accept your fate of having the smelly guy who only came in to buy alcohol hovering inches away from you.

You also have to bag your own groceries. If you’re not fast, don’t panic; put what you can into your bags and get the rest into your cart. Most German supermarkets have an area where you can bag your groceries after leaving the lane. If I’m shopping alone, I almost always do this unless I’ve only purchased a few items. It makes things a lot less stressful.