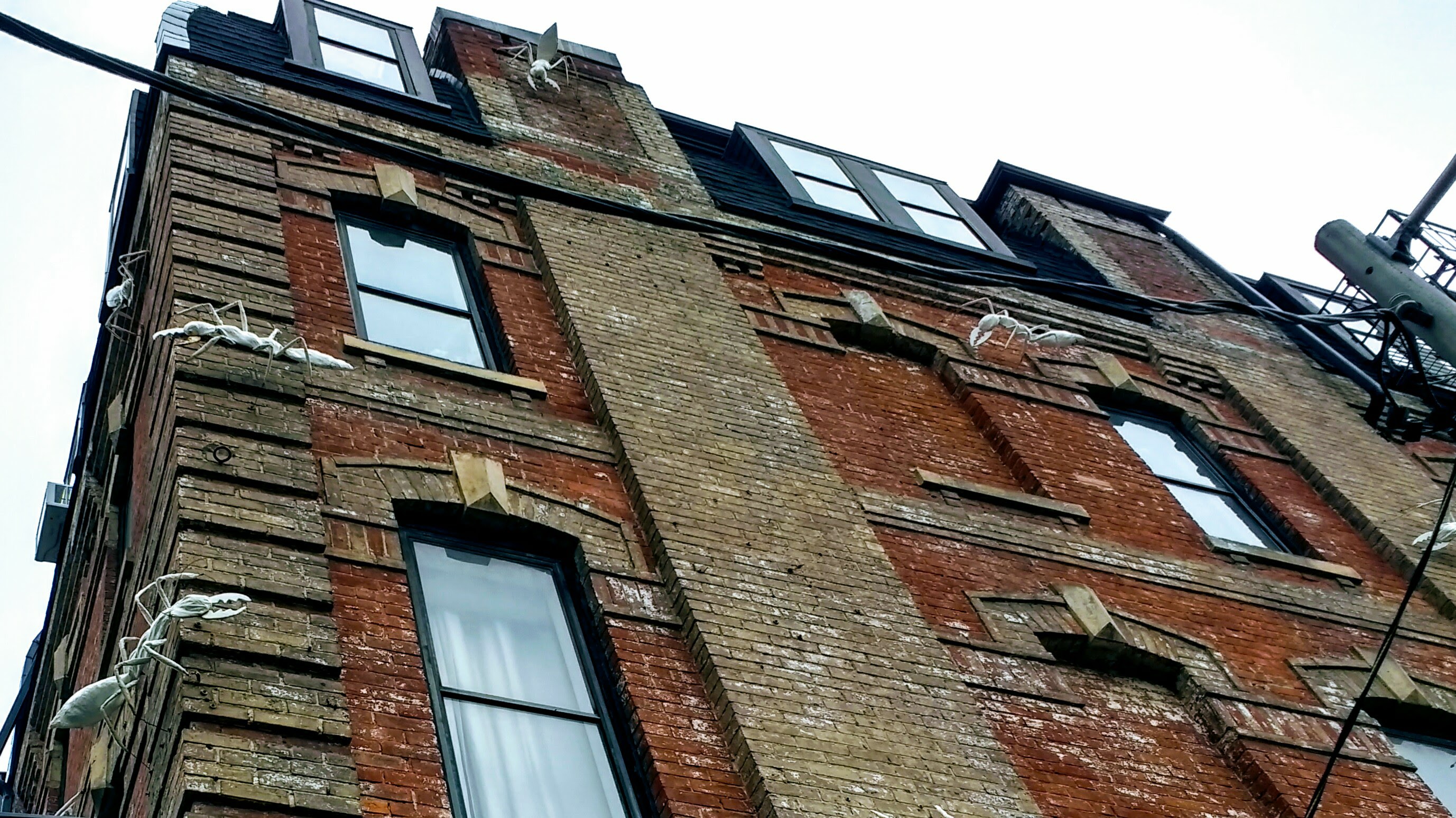 Street art near our AirBnB

After stopping by my grandmother’s for a Thanksgiving lunch, Jan and I spent the long weekend in Toronto, Canada.

We had two main goals for this trip: eat döner and visit the Christmas Market.

We started our first full day with cappuccinos and croissants at Jimmy’s Coffee. I was surprised to discover that the coffee shop was named after Jimmy Hoffa, the infamous labor union leader who disappeared under mysterious circumstances in Bloomfield Township, Michigan.

After breakfast, we did some very casual Black Friday shopping. In the United States, Black Friday is chaotic to the point that it’s a bit of a national embarrassment; well, to me, anyway. In Toronto, the sales were just as good but everyone was much more relaxed.

Our next stop was Kensington Market. We walked around the neighborhood and browsed the shops for a bit, working up our appetite for Otto’s Berlin Döner. Although döner is very common in Germany, it is hard to find this side of the Atlantic. Outside of Germany and Toronto, I’ve only had it Washington, D.C.

After lunch, we walked over to the St. Lawrence Market. The market has hundreds of stalls and shops filled with fresh foods like sausage, game meats, cheeses, vegetables, fruits, and baked goods. They also sell a wide variety of packaged international foods. I bought some maple candy, which Jan found absolutely disgusting. Oh well…more for me!

Once we were done at St. Lawrence, it was finally time to go to the Christmas Market. I was eager to get there before 5pm, because then the price of admission goes from free to $6 per person. What can I say? I’m a cheapskate.

The Christmas Market in Toronto has live music, a huge tree, and stalls selling trinkets, candy, food, and more. I’ve only been to a few other Christmas Markets, and while the one in Braunschweig, Germany was the best (that I’ve been to), the Toronto Christmas Market is worlds better than the much smaller (and crowded) one in Chicago.

Since we had already checked off our two “must-do” activities on our first full day, our second was much more relaxed.

After walking around Downtown for a bit, we made our way over to Ripley’s Aquarium. On the way, we walked through a festival for Canada’s Grey Cup. As someone who doesn’t really enjoy sports of any kind, let alone American Football, I was surprised to see just how popular it seems to be in Canada. It was also amusing to see that Nissan was advertising heavily for their trucks at the festival; I could be completely wrong, but I just can’t see that going over well in the USA.

Even though the aquarium seemed even more crowded than last year, we had a great experience. In fact, this year’s visit was even better than last year’s, because the octopus was out! He was not only visible, he was moving between both tanks. Unfortunately, several people in the crowd ignored the very obvious “no flash” sign on his tank. If that is what that poor octopus experiences on a daily basis, I don’t blame him for hiding most of the time.

For dinner, we went to the Amsterdam BrewHouse, which was very busy due to a private event in their back area. They also had a special beer that they only serve once per year, but sadly they were out of it by the time we were seated. The gose I had instead was very good, and it was amusing to hear the waiter correct my pronunciation by calling it a “goose.”

After dinner, we went to a dive bar called The Communist’s Daughter. The outside is not marked at all: the sign simply says “snack shop.” The inside is a very cramped but cozy bar that may have been an old soda shop in it’s booze-free early days. I don’t think more than 30 people could have fit in there at the same time, and even that estimate may be generous. The beer selection and service were both excellent.

Toronto is one of my favorite places to visit. The people are friendly, the sights are beautiful, and there’s no shortage of great food and drink. If you haven’t been yet, I cannot recommend enough that you visit for at least a weekend.