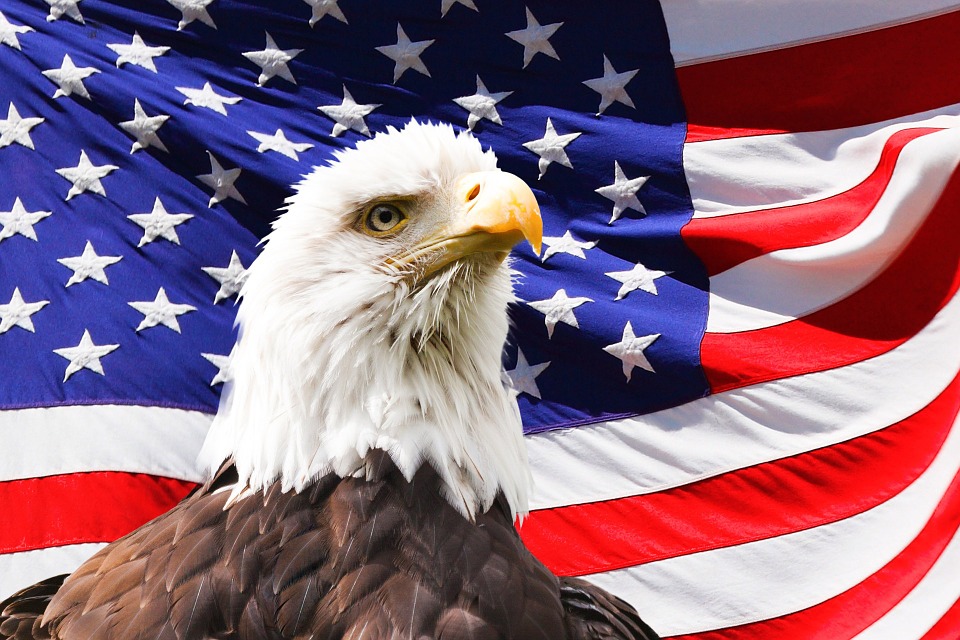 America. My homeland. We get a lot of things wrong, but there are a few parts of American life that I still miss as an expat in Germany.

This post was originally supposed to be a counterpoint to last week’s Top 10 Things Germany Does Better than the USA. Was. After my husband asked me, “what will you put on there?” I realized I only had a list of four; a real problem when you need six more items to make a top 10 list.

See, there are a lot of things I miss about America, but that doesn’t necessarily mean they do X better than Germany. I need to spend more time here and speak the language fluently before I can make those calls. So, look out for that list in the distant-ish future. Until then, here are the top 10 things I miss about the USA.

It still blows my mind that people put in the kitchen (and all of the light fixtures!) to a place they’re only renting. You install everything here, not just the appliances; from the cabinets, to the counter and the kitchen sink, it’s your responsibility. With prices that really aren’t that much cheaper than America, your landlord is probably making a lot of money on you (and your neighbors) after saving so much on the kitchen.

The expectation is that you will move the kitchen with you to your next apartment; but, what if it doesn’t fit perfectly? What if you need more cabinets, but IKEA no longer sells that style? What if it simply doesn’t go with your new place? You now have to invest in an entirely new kitchen for a place you’re only renting.

The upside to this system is that you control how up-to-date your kitchen is. Even moderately-priced apartments in the USA often have outdated kitchens. Our new kitchen, pain in the ass as it was for my husband to install, looks really nice and the appliances work great. Perhaps, with time, I will find myself preferring this way of rental life.

9. Not Being Stared At

It’s no secret that Germans stare. You can have absolutely nothing on your face, nothing in your teeth, every last strand of hair in place, your fly up, and your clothes perfectly clean and pressed, and there will still be someone staring at you. Why? I don’t know, but coming from a culture where it’s considered rude to stare, I find it unnerving.

If someone is staring at you in America, either there is something wrong with them or they think something is wrong with you. Here, staring seems to be a national pastime. Sitting on the bus? Make hard eye contact with someone and scowl when they give you a nervous smile! Walking down the street? Stare down passers by and make a game out of not blinking! Not even once! Don’t do it!

This may be peak American, but I don’t care: I miss ice in my drinks, dammit! Water just doesn’t taste good if it’s anything less than ice cold; especially if it’s mineral water (yuck), which is all they seem to have here, at least in restaurants. If you ask for tap water, your server will look like you just slapped their grandma Helga; a real shame, as water tastes good here. It’s not chlorinated like it is in most of the USA.

There seems to be some kind of bias here against tap water and, at the risk of sounding like a conspiracy theorist, I wouldn’t be surprised if it was German restaurants trying to scare people away from tap water in order to keep making money on the bottled stuff. It’s perfectly safe here to drink, and it’s better for the environment if bottle and glass use is reduced.

Foreign films generally don’t have a wide opening in America, but when they are available, they are almost always subtitled. There’s a common belief in America that dubbing is tacky; perhaps because it’s associated with making kung-fu flicks cheesy in the 70’s.

Now that I’m in Germany, English movies are the foreign films. if they subtitled them here, I could still go to the movies on a semi-regular basis. Unfortunately, they dub everything, so I’m stuck waiting until a movie comes out for rent on iTunes. Even if I was fluent in German, I still wouldn’t want to watch a dubbed movie. It’s distracting when mouths don’t match what’s being said, and if they do, it probably means the translation isn’t correct.

Full disclosure: it is possible to see movies in English here; just not very often in the smaller city where we currently live. The neighboring city of Braunschweig has a few more English showings than our local theater, and it’s very easy to see a movie in English if you’re in Berlin.

As I said in my last post, mainstream beer is great here! Germany is well-known for its beer, and for a good reason.

I’ve also had a chance to try some of the craft beer here, and while it’s good, I still prefer craft beer from the USA. I like my craft beer creative, and since we’ve moved here it’s been a lot of technically well-brewed beer that’s, well…kinda boring.

One of my absolute favorite beers in America is a limited release from Founders Brewery. It’s a wheat beer with mango and Habanero pepper called Mango Magnifico. Another favorite is a peanut butter stout from the River Rouge Brewing Company, which actually tastes like peanut butter.

You’ll have to go to Michigan for the good stuff, of course; it’s where the best craft beer in the USA is made.

I know that many apartments here do not have insect screens for their windows because the buildings are older, and it might be difficult (or even impossible) to fit screens onto those windows. However, some buildings here are newer, and could have been built not only with furnished kitchens, closets, and light fixtures, but also with window screens.

You have to open your windows a few times per day in your average German home or apartment, because there’s basically no ventilation otherwise. This means that, during the summer, every bug in the area has the opportunity to stop in for a visit; or, in my case, for a bite. There were so many mosquitoes this year, and there was nothing stopping them from coming inside.

We tried to install a screen door about a month ago, when the mosquitoes were at their worst, but it was difficult to attach to the door and there are gaps they can (and do) easily get through.

The insect screens in America are built right into the windows, and can slide out of the way; so as long as it hasn’t been damaged, you can get a nice breeze while keeping out annoying pests. It’s great, and while I do like the turn-tilt windows here, I’d take the American ones any day if it means I get insect screens.

At first, the reason why I can’t find good Mexican food here seems obvious: Mexico is really far away. Except, I’ve had some amazing Southeast Asian food in Germany, and places like Vietnam and Thailand are basically just as far away from here as Mexico. So what gives?

I think part of it is because we’re in a small city right now; I’ve heard you can find some pretty good Mexican food in Berlin. Authentic? I’m not sure; but then again, Mexican food in the USA doesn’t taste like Mexican food in Mexico. When people settle in new areas, their cuisine inevitably changes; it’s why Italian food in America tastes so different from Italian food in Italy. You work with different ingredients and recipes slowly evolve in different directions from your homeland.

Banking is complicated here. I opened an account a few weeks ago, and have just started getting letters about my banking and savings accounts. My card came in the mail yesterday, but I’ve yet to receive the next letter, which will have my pin code. So, my card is useless until that letter finally arrives…whenever that might be.

In the USA, you pick your own pin code while at the bank. Often, you will also get your bank card right then and there.

In addition to the mountains of paperwork, I also received the TAN generator pictured above. In order to open my online account, I had to use it to generate a serial number and then email the result to the bank. If the point of the generator is for security, then why can I just email the number? It looks like the generator will also be used for extra “security” during online banking. I’m sorry to say, but US banking is much easier; I would be surprised to find out that it’s any less secure without the TAN generator.

Most debit cards in America can also be used like a credit card. They are simply pulling funds from your bank account, meaning no actual credit is used. This is great for things like online subscriptions if you do not want to use (or do not have) a real credit card. Sadly, that option doesn’t seem to be available here.

You do not need to talk to a pharmacist in the USA to buy simple drugs like aspirin. Unless the medicine you need is prescription-only, or has ingredients that can be used to make illegal drugs, it is available on the shelf for purchase. Hell, if you do self-checkout (something else I’ve yet to see here in Germany), you could buy your medicine without interacting with a single employee.

Here, you can only buy “natural” (AKA bullshit that doesn’t work) products in the store. If you need aspirin, you talk to the pharmacist. Allergy pills? Go up to the pharmacist. Have a yeast infection? Have fun talking about it with the pharmacist! Feeling gassy or constipated? Now the pharmacist (and any nosy Oma listening in) gets to know all about your bowel troubles. Fun!

I realize there is a perception that America has problem with prescription drugs, and that is true, but the key word is prescription. The “epidemic” going on right now is with prescription pain killers, not with over-the-counter medicine. No one is addicted to Tylenol or Tums in the USA; they’re abusing things like Vicodin, which they originally got legally with a prescription from their doctor.

I’m sure none of you can relate to specifically missing my family and friends (they’re great, though; you’d love ’em), but I think feeling lonely in a new place is something most people can relate to, not just other expats.

Moving to a new place is hard for anyone, but it’s harder when you’re out of college, as making new friends is very difficult. It’s especially difficult in a place where the people are notoriously more reserved, like Germany. I’ve met some wonderful people through my husband, but no one can replace the friends and family I left behind.

Well, that’s it! I hope you enjoyed the list, and I hope there were at least a few surprises; These lists are pretty common for expats to make, and they usually share a lot of similarities. I didn’t include everything being closed on Sundays, for example, because it honestly isn’t that bad; most restaurants and cafes are still open. You can go for a nice long bike ride in the countryside and then eat back all of those burned calories with Kaffee und Kuchen.