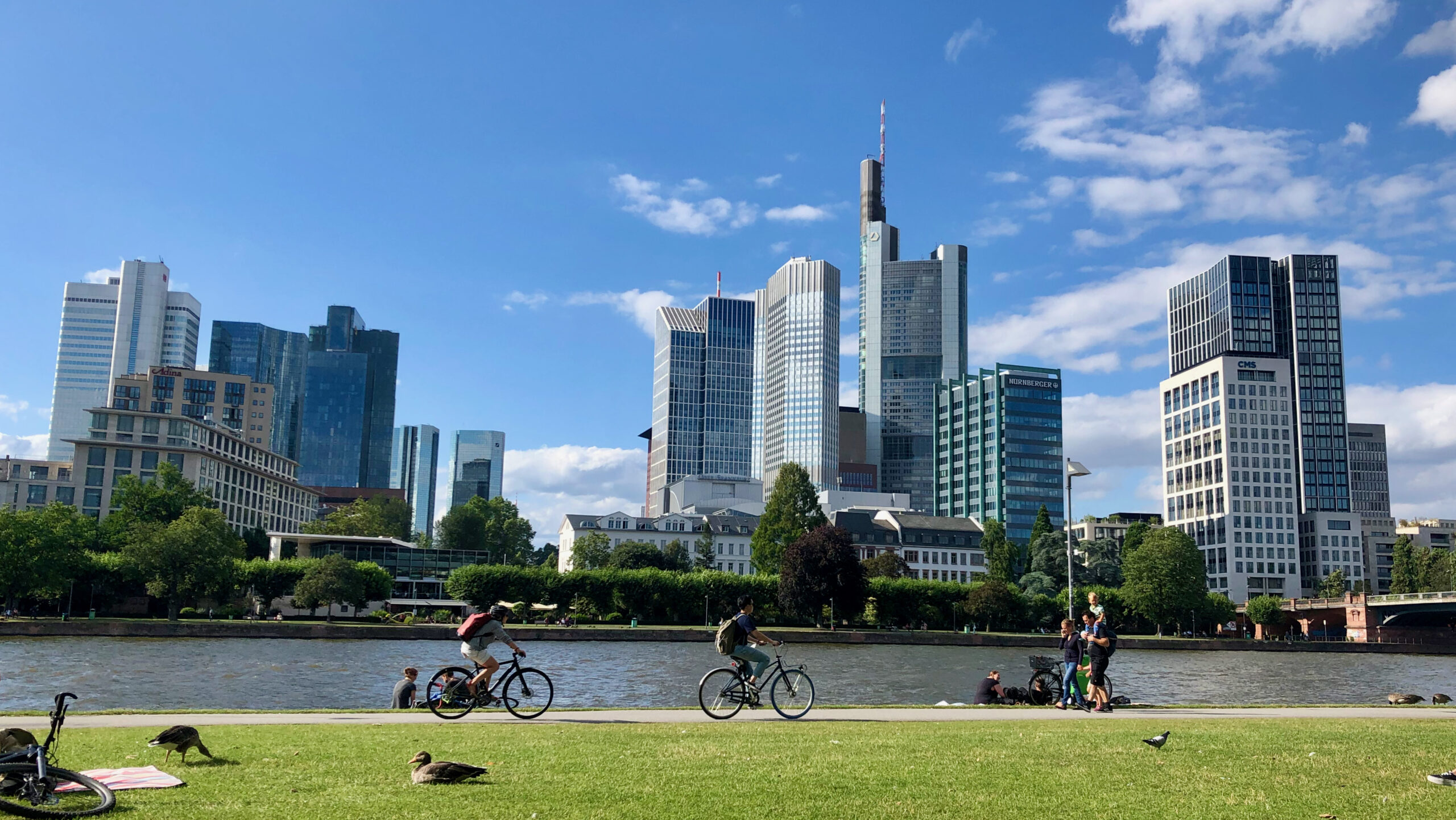 Frankfurt am Main is the largest financial center in continental Europe and the fifth-largest city in Germany. It’s also the only city in Germany with a classic “city skyline” of skyscrapers. Some people refer to it as “Mainhatten”, because of how it (supposedly) resembles New York City.

Does it? Well, I jokingly shared a photo of a cluster of sky scrapers with some friends and asked them to guess where we were, and many thought we were in…Detroit.

But, no; sadly, we weren’t back in Detroit this Summer. As much as I wanted to go back home to Michigan, we decided to play it safe, and remain in Germany. My husband has many fond memories from his time working in Frankfurt; so, we decided it would be nice for a week-long trip.

Our first day in the city, we walked around downtown and through the park. There was a lot of bike traffic; more than I’ve seen anywhere else in Germany. We had actually brought our own bikes with us for this trip, but I was too nervous to ride on the first day. Seeing so many people cycling fearlessly, though, eventually set my mind at ease. Well, that and the clearly-marked cycling paths and barriers between bike and car traffic.

We visited several museums during our visit, including the German Film Museum, Museum für Angewandte Kunst (museum of applied arts), the Caricatura Museum and the Communication Museum.

First, the “bad”: I was a little disappointed with the German Film Museum. I was expecting more film props and memorabilia from German films. They have some props and costumes, but not very many from German films. In general, the museum doesn’t have a lot to see; you can finish in less than a half-hour.

Now, the “OK”: I advise skipping the Caricatura Museum if you haven’t lived in Germany for at least 20 years, even if you speak the language; unless, of course, you’re well-acquainted with German politics over the last two decades. Most of the cartoons are older and few are about events outside of Germany; so, if you didn’t grow up here, you probably won’t find most of the comics very funny.

We visited the Museum für Angewandte Kunst primarily to view their Dieter Rams design exhibit, because my husband is interested in the design of electronics and household appliances. I personally found the temporary photography exhibit more interesting. It’s a nice museum if you enjoy design, modern art and photography, but it is rather small and sparse.

Finally, the good: I cannot recommend the Museum for Communication enough! This was easily my favorite museum in Frankfurt. There were so many things to see, and all of their interactive exhibits were in working order. Is it just me, or is that sadly rare these days?

I especially enjoyed their temporary special exhibit on letters that were sent to the BBC by people living in the GDR, for a program called Letters Without Signature. Citizens of the GDR would send in letters to this program, in the hopes of having them read on air. Despite the fact that being critical of the government was a punishable offense in the GDR, East Germans risked what little freedom they had to write into the program and tell the world their story.

Whether you’re a dedicated plant parent searching for inspiration, or just down for looking at some pretty plants for a few hours, you should check out the Palmengarten. There’s plenty to see and many opportunities for lovely photographs. It took us easily two hours to see everything this sprawling garden had to offer.

As for food, the best meal we had, hands down, was at Jianbing Plus, a very small restaurant that specializes in Chinese pancakes. It’s very close to the Römerberg, which makes it the perfect spot if you want to check out the Altstadt while avoid tourist prices for your lunch or dinner.

We also really enjoyed the craft beer at BrauStil; so much so, that we went twice. They have their own beer on tap, sell bottles of craft beer from other breweries, and also have an assortment of wines and non-alcoholic drinks. It felt a lot like visiting a craft beer place back in Detroit; the building appeared to be an old gas station or repair shop and the seating is communal.

If you want to escape the concrete for a while and get some fresh air, spend some time in The GreenBelt. It’s comprised of several green spaces and trails that are suitable for hiking, cycling or just casual walks. We cycled through there on our fourth day in the city, and it was a nice way to break up the trip by being a little more active.

So, that was our trip to Frankfurt. It was really nice to get out of the apartment for a while, and it was also cool to see a different city skyline than I’m used to in Germany. In a few weeks, I’ll have a post about my trip to Leipzig. Until next time!