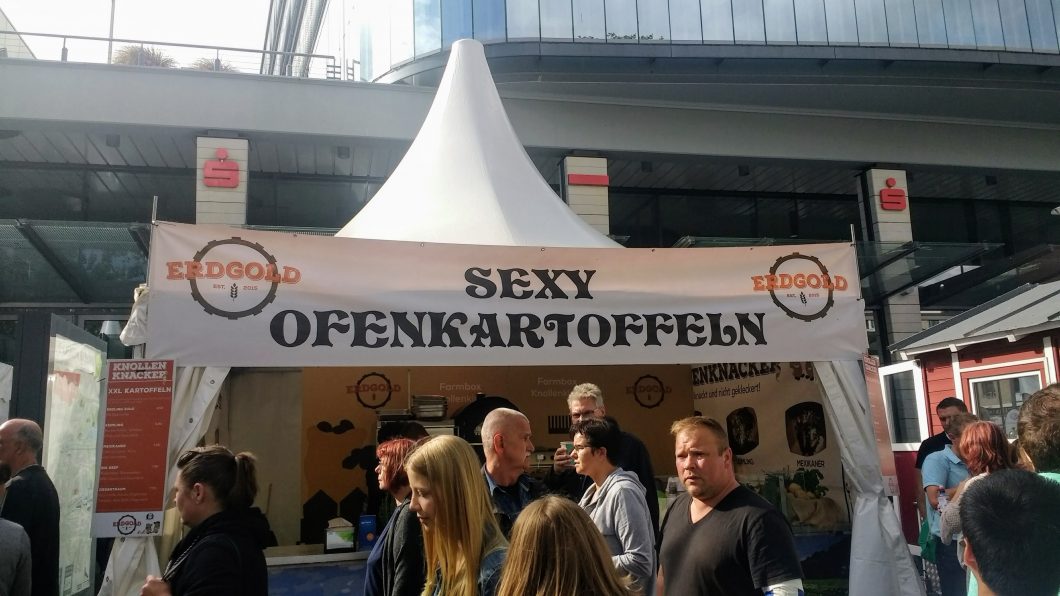 This past weekend, we attended the Tag der Niedersachsen, which was held right here in Wolfsburg. This festival was for the entire state of Niedersachsen (Lower Saxony). I’d compare it in size to a county fair in the USA. More than half of the booths were businesses, clubs, and other organizations trying to garner interest in what they’re selling or doing. The German army was also in attendance.

Along with this old fighter plane, they also brought drones and a few Humvees for the kids to pretend to drive.

There was also a lot of antique farm equipment on display, including this old rig:

I’m still not 100% sure what they were doing. I thought they were just showing that it still works after all these years, but my husband said they were using the hay to power the nearby tractor.

About a quarter of the attendees were dressed in traditional Niedersachsen folk costumes. I didn’t get a good picture of their outfits, but you can have a look here to get a good idea of what they were wearing.

A few people from around the area were showing off their antique VW cars, all of which were still in beautiful condition. You could tell they love their cars, and put a great deal of effort into keeping them maintained.

There was a fair number of food and drink stands, including a BBQ stand with a huge smoker. We didn’t eat any barbecue at the fair, because we had dinner at a friend’s place for his birthday party. It’s hard to resist the lure of treats at a fair, of course, so I did enjoy a nutella-filled crepe. The worst of American fair food has yet to come to Germany; there were no fried candy bar stands in sight.

Another difference between this fair and your average American county fair is that there were no rides. There were a few small things for kids, such as a giant trampoline where the kids get strapped in by their arms so they can do flips, but no rickety roller coasters or bumper cars.

As with any fair, there were several musical stages with cover bands and washed-up former stars. Interestingly, they did have a few contemporary German pop stars. In the USA, current pop stars would never play a county fair; it’s a sure sign that your career is over. Here, however, that doesn’t necessarily seem to be the case.

Overall, the fair was interesting, but I had a better time at the smaller fair we attended two weekends ago. This one was a bit too commercial, in my opinion. It was also a little unnerving to see so many police walking around with large guns. There was a huge police presence in an effort to prevent a terrorist attack, and that included blockading the streets about a block away from the fair in every direction. We had heard that we wouldn’t be able to bring any glass bottles into the fair, but no one actually checked bags at any of the entrances.

In other news, I just had my appointment for temporary residency (Aufenthaltserlaubnis) in Germany. Four weeks from now, I will receive my card, which will allow me to live in Germany for three years. After that, pending a language test, I will be able to apply for indefinite residency (Niederlassungserlaubnis). If you’re interested in the process for becoming a resident in Germany, please check back over the next few weeks, as I will have a detailed post to explain the process.