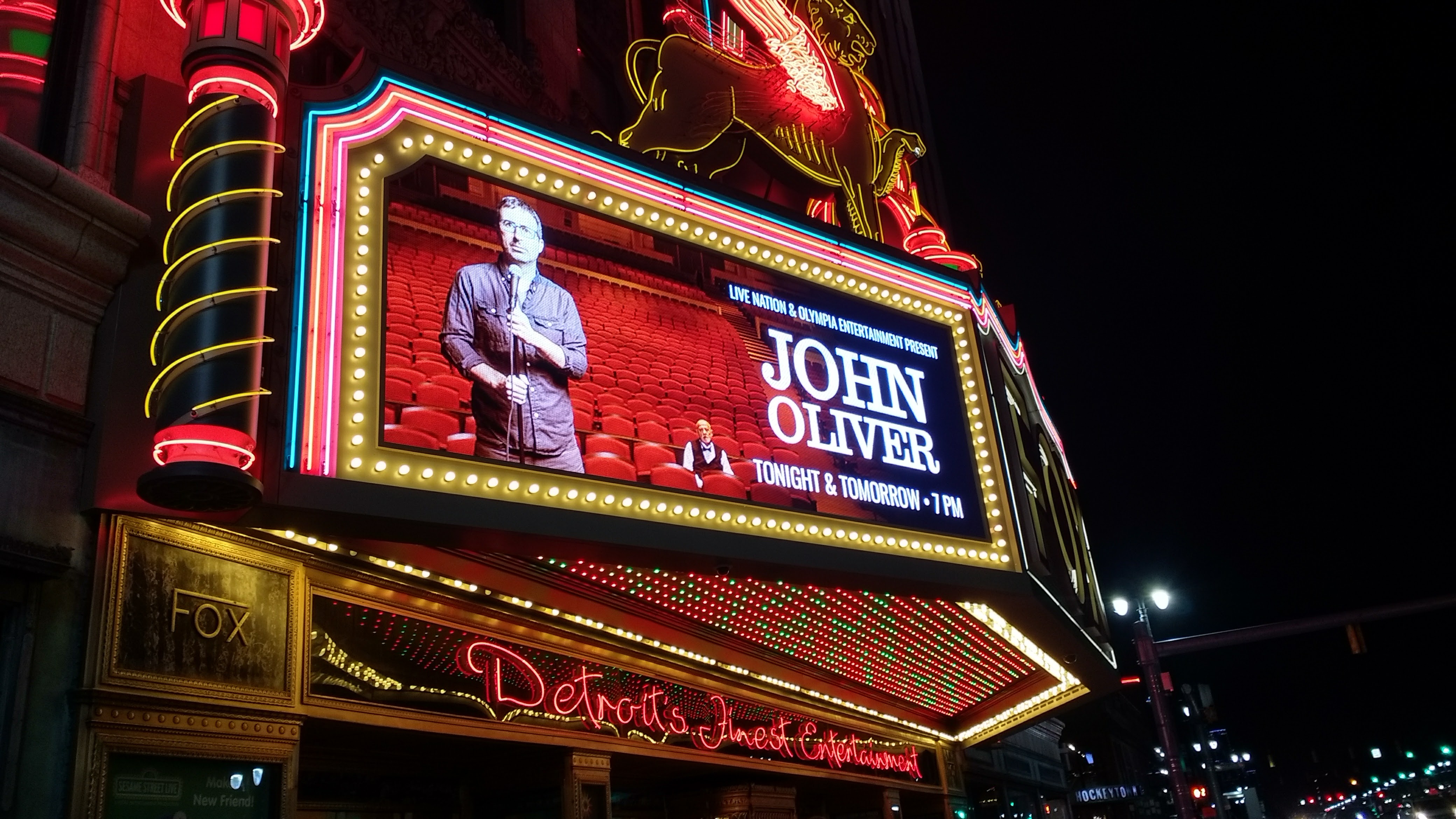 Last Friday, Jan and I saw John Oliver perform stand-up at the Fox Theater in Detroit. To say we were both pumped would be an understatement; I bought the tickets the very first day they went on sale in July. I’ve been a fan of Oliver since his time on the Daily Show as a correspondent, and even though Jan never had the fortune to see the Daily Show before Trevor Noah took over, he watches Last Week Tonight with the same undivided attention I used to give Jon Stewart.

Oliver’s show was a good mix of improvisation, social commentary, and the self-deprecating jokes we’ve all come to expect. Obviously, Oliver was hilarious, but what I really found myself enjoying was his stage presence. Oliver has a knack for delivering well-polished material as though they were thoughts that had only just popped into his mind, making even his tried-and-true jokes about Australia feel fresh at the time. The best parts of the show, hands down, were the little improvised bits between Oliver and the audience.

Around the beginning of his routine, Oliver asked the audience what we do for New Year’s Eve in Detroit. Someone mentioned that we drop a giant “D,” and after making fun of that for a few minutes, he said that maybe he would have to check that out for himself. Jan and I had been planning to spend New Year’s Eve in Detroit, so we joked that it would be pretty funny if we actually saw him at the ball drop on New Years Eve.

Well, we obviously didn’t see him at the ball drop. If we had, I would have made this post much earlier, and it would have begun with something like, “WE MET JOHN OLIVER, HOLY SHIT YOU GUYS.”

However, we did eat at the same place as him on New Years Eve!

Just…not at the same time.

We arrived at Bobcat Bonnie’s just before the rush, and they had an excellent New Year’s Eve menu. It all seeemed so perfect; the owner and our waitress were super friendly, the food was absolutely delicious, and the portions were almost comically over-sized. It’s a great, seriously underrated place that you definitely need to check out if you’re in the Detroit area.

So we left around 9, confident in our decision to move closer to where the “Giant D” was being dropped. We had a drink at Standby, stopped at the Detroit Beer Company for the first time, and arrived just in time to see the modestly-sized D “drop” a few inches at midnight, coming to rest about halfway down the pole.

That last part was a little disappointing, but overall, we had a great night.

…at least, I thought we did. Then, Jan came across this article, and we realized just how close, and yet so far, we came to crossing paths with one of the few shining lights in the darkness that was 2016.

On a personal level, my 2016 was actually pretty good. I got to visit a few new places, spend more time with family and friends, and I got engaged to the love of my life.

…but I also narrowly missed seeing John Oliver, so: