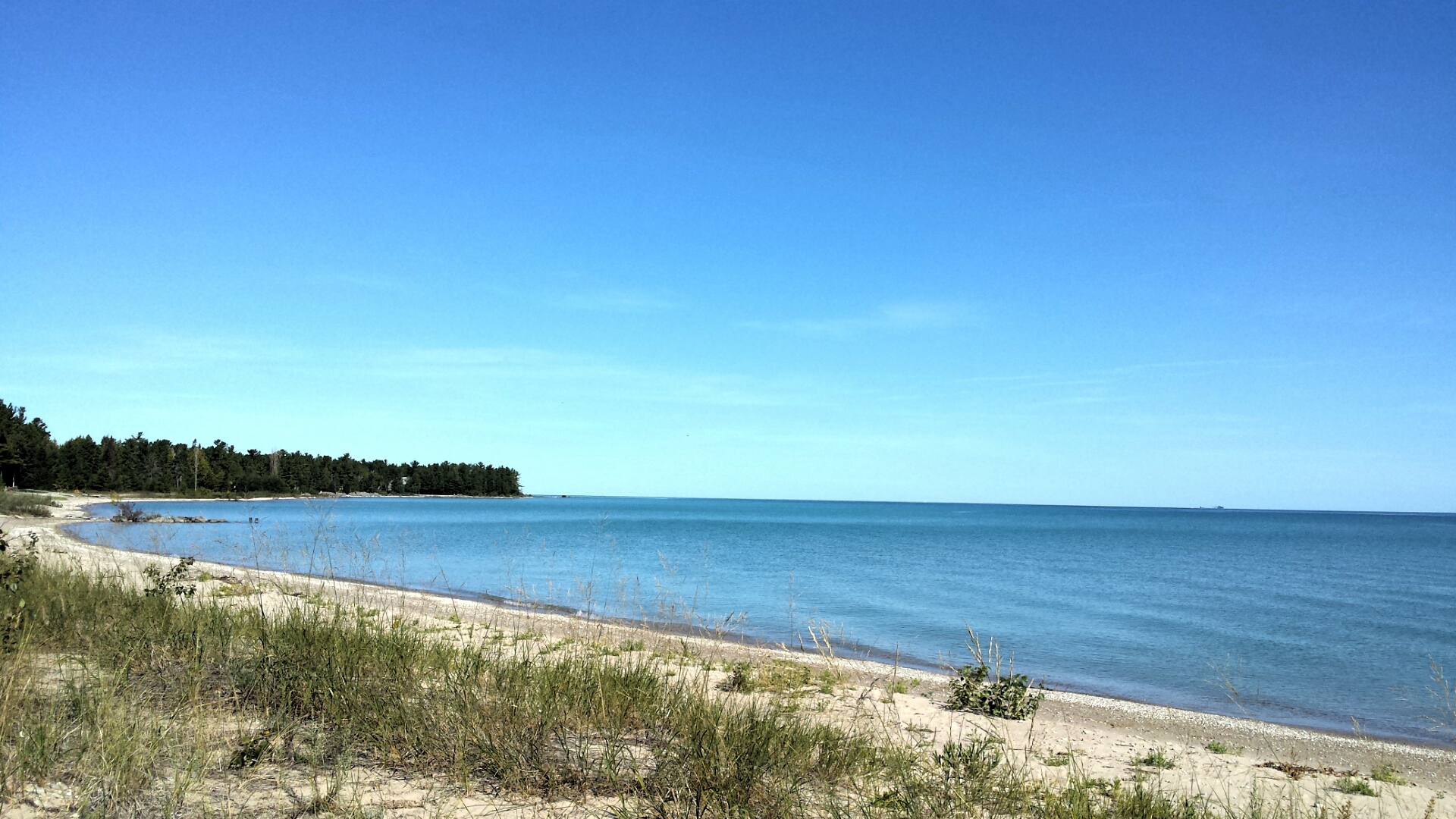 This Labor Day Weekend, my boyfriend and I drove 4 hours North to camp at Hoeft State Park. “Going up North” is a very popular Michigan pastime, so when my boyfriend asked why I had chosen this particular park, the short answer was “they still had openings.”

The long answer was that only two of the parks with open sites had real bathrooms, and Hoeft was one of them. Camping in a tent is hard enough for me; I draw the line at vaulted toilets.

(But not at camping in the Take on Me video)

I also knew from experience that “real” toilets and showers might not mean much; I had just been to Interlochen State Park two weeks prior, and their dirty bathrooms and cold showers left a lot to be desired. Thankfully, Hoeft’s facilities were clean and had plenty of hot water.

Another bonus: there were paved, well-maintained bike paths throughout the park and along the shoreline, connecting us to local parks, harbors, and the nearest town, Rogers City.

Calling it a city was rather generous, as it had very little going on; there were very few shops in their downtown area, and most of them were closed.

Thankfully, The Painted Lady Gallery was open on Saturday to meet all of our needs.

(Jan, showing off his delicious “cappiccino”)

They also had ice cream, a lunch menu, toys, and (strangely) a lot of kitchen gadgets for sale.

On Sunday, we drove another hour North to Cheboygan State Park, and rode our bikes into town. Although they didn’t have a bike path like Rogers City, there was basically no traffic; during the entire 20 minute ride, we only had to move over once to let a truck pass by.

Cheboygan, much like Rogers City, was a ghost town. Outside of their downtown, we saw only a single pedestrian, and maybe three cars at the most. Thankfully, capitalism stops for no man, so there were still a few restaurants open for business. We ate at a nice place called Mulligans, stopped by the Cheboygan Brewing Company for some beer for later, and headed back to Hoeft for some swimming and volleyball.

The water was practically freezing, but once the hypothermia began to set in, it actually became rather comfortable. There were even some decently-sized waves, which made me regret not having a boogie board to bring. The water was very clear and clean, which the Park Ranger seemed very proud of, telling me that they “almost never” have pollution issues because Lake Huron wasn’t being shared with Chicago, unlike that poor sap Lake Michigan.

The very best part of the trip, however, was the clear sky and low light pollution. Even though I live in metro Detroit now, I am from a much less populated town, and yet I have never even come close to seeing this many stars before.

We even saw the Northern Lights. To the naked eye, it was a beautiful white shimmer in the distance, but all of the colors suddenly became visible through the camera.

I think we spent a little over an hour on that cold beach; him setting up long exposures, and me laying on the sole bench, staring up at the Milky Way while listening to the waves.

Ordinarily, I’m not the biggest fan of tent camping; I’ll do it, but I’ll be worrying about spiders the entire time. My overpriced camping mat from REI will never be as comfortable as the cheapest air mattress, but our tent is just too small to accommodate one. And sharing bathrooms, no matter how clean they may be, will never be on my list of “things I like to do.”

Still, as far as vacations go, this could have been a lot worse; in fact, I would venture to say that this was one of the better short vacations I’ve had in a long time. I’m not sure if we’ll ever have time to go back up to Hoeft State Park again, but I will say that I’m glad we made the trip at least once.