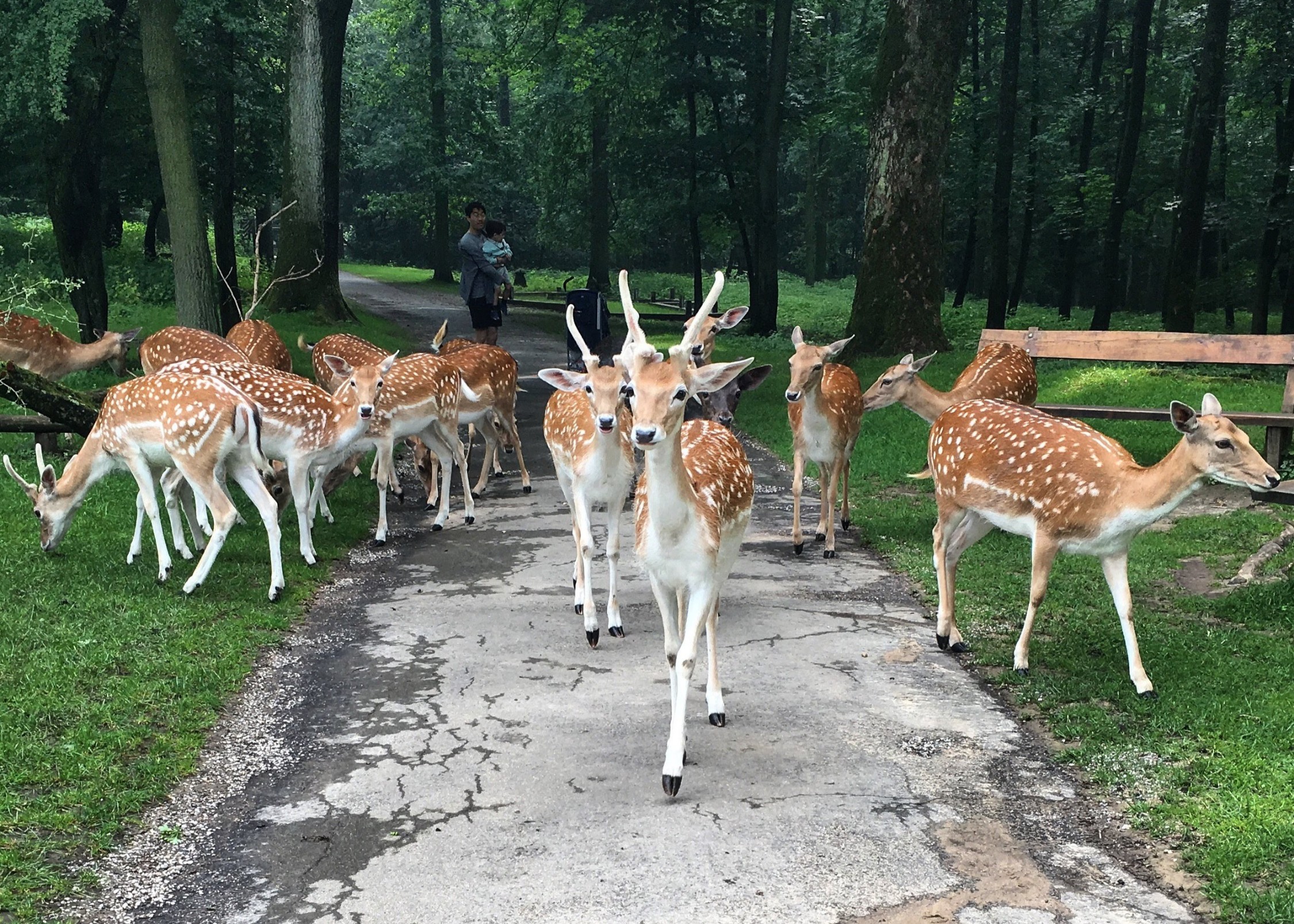 By Sunday morning, Düsseldorf was a ghost town. We didn’t see a single person on our way to get breakfast. Perhaps, they were all still asleep after a night of partying extra hard to Schlager music. There were a few other guests getting a bun or coffee, but the place was by no means full. About halfway through our breakfast, another guest sat down and began blasting dance music from a blue tooth speaker while he ate his croissant. I expected the older men at the table behind us to be annoyed, but they seemed completely unfazed.

After picking our friend up at his hotel, we made our way to the Wildpark Grafenberger Wald. This park features animals native to the area, including deer and wild pigs. The best part of the park is the large, enclosed area where you can feed and pet the deer.

When I first went through the gate, I started searching through my backpack for my phone. Immediately, three deer ran to me. I felt like a Disney princess!

The feeling was short-lived, though; they only ran up because they thought I had food. Once they realized I didn’t have anything, they took off.

The deer don’t like to be touched and will only tolerate you so long as you have treats for them. The backpack “trick” worked really well to get them close enough for pictures, but it was impossible to pet them without food.

Unfortunately, you can’t pet the wild pigs. You can, however, throw some food into their pen if you so wish. Or, you can take a chance and try to feed them through the fence. The adults aren’t as cute as the li’l chubsters we saw at Tierpark Essehof, but the babies sure are!

After lunch and a quick coffee, we spent some time in the Museum Kunstpalast. This museum had an extensive collection of glass, as well as a temporary exhibit of Rembrandt’s sketches. I believe we only paid 5€ each. For the price, I would say this museum is definitely worth checking out. The majority of the paintings in the permanent exhibit are your standard fare of renaissance portraits of nobles and religious…stuff. Perhaps I’m just not cultured enough, but I feel as though such paintings get boring very fast. There are, however, a few stand-out landscapes and modern portraits.

Our last stop was Kaiserpfalz Kaiserswerth. This castle ruin dates back to the 12th century and has a complicated history. The name Kaiserswerth means “Island of the Emperor” and was named as such because it was built on an artificial island. The castle has housed Kings, served as a prison for prominent prisoners, and ended up a quarry for nearly two centuries. By the mid 19th century, the castle had been stripped to its foundations on the Eastern side.

Finally, from 1899 to 1908, the castle was excavated and resorted for the first time. The ruin was left alone again, until the time of national socialism, where it served as a meeting place for the Hitler Youth organization. The most recent restoration was completed in 2001.

We ended the night at Kushi-Tei of Tokyo, a Japanese restaurant in Düsseldorf’s very own Little Tokyo. The food was very good, but a little on the expensive-side, even for a sushi restaurant. The restaurant was recommended by Japanese co-workers of the friend we were visiting. Many of the patrons were speaking Japanese with the waitstaff, which made me forget for a moment that we were in Germany. I can’t say I felt like I was in Japan, having never been there (yet), but I did strangely feel like I was back in the States. Or, maybe it was because the couples on both sides of our table were speaking English.

So, needless to say, Sunday was our best day in Düsseldorf! I’m glad I visited at least once, but seeing our friend was what made the trip truly special. I don’t think this is a city I’ll be back to anytime soon, but you never know!

For now, I’m writing this post from a desk in the apartment I’ve rented in Vienna, Austria. I’m taking a two-week intensive German course through the Goethe institute. This city is amazing; it’s beautiful, cleaner that any of the German cities I’ve been to, and there’s so much to do. I honestly don’t want to leave! I’ll have a post on that very soon; possibly, two. I also have to apologize for the delay between my posts on Düsseldorf. Although these past two weeks have been fun, it’s still an intensive course, and I’ve been quite busy!