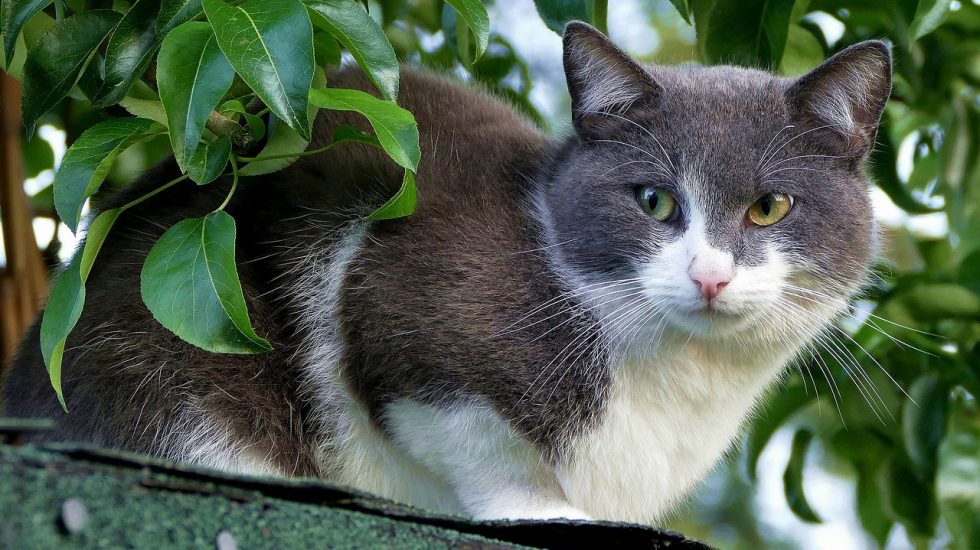 If you’re renting an apartment in Germany, chances are you have neighbors with cats that regularly go outside. While that might seem perfectly normal to your average German, I personally found it to be one of the strangest aspects of life in Germany. In the USA (at least, where I’m from) you only have an outdoor cat if you live in a house with a yard. If you’re renting an apartment (even if you technically have a small, private yard) Mr. Whiskers is strictly an indoor cat.

The one outdoor apartment cat I ever encountered in the USA was considered a bit of a local menace, regularly leaving half-dead frogs on people’s cars. Most people thought he was a stray. Those who found out he had owners would call them everything from hippies to white trash. It didn’t help their image when their little girl would run around, barefoot, while playing with her cat in the parking lot.

I definitely thought it was weird, but I never thought it meant the owners were bad people. Just…different. Eccentric.

When we first moved to Germany, one of the families who lived directly above us had a ladder going from their balcony to the ground. They also had what I initially thought was a dog house on their balcony. The ladder, it turned out, was for their cat. So too, then, was the “dog house.” Applying my American experience of outdoor cat in an apartment = weird, I assumed they were also just different. You know: eccentric.

It turns out, though, that they’re not so different. Once I began looking for cat ladders, I started noticing them all the time. I went out in the rain today just to take pictures of them for this post. I found several in my “neighborhood” of apartments, but the picture to the left is the best I was able to get. Between the rain, and my fear of getting yelled at in German, it was the only one that turned out well. All of the other pictures I took were from too far away; great for a creeper shot, not so great for capturing the majesty of the cat ladder.

There are at least four cats that I’ve seen roaming around the area, and I suspect none of them are strays. The cat who lived above us has sadly moved away, but the people who moved in next door to us have an outdoor cat as well. They live on the ground floor, so their cat doesn’t need a ladder, but she does have a little outdoor cat house.

When they first moved in, their cat didn’t seem to quite remember where she lived; so, we’d occasionally look over at night while watching TV to see a cat pawing at our door. As soon as we made eye contact, she would bolt away in terror. Once, she came back to our window a mere ten minutes after running away. She hasn’t done it since, so perhaps that traumatic experience was enough to help her finally remember where she actually lives.

If we had a cat, I’m not sure if I would let it go outside. Outdoor cats have shorter lifespans in general. I also don’t really trust other people when it comes to the treatment of animals, and I would always have anxiety that someone might try to hurt my cat. Of course, I’m coming from a place where every inbred idiot has a gun. Sadly, it’s not uncommon in the US for people to shoot at cats that go in their yard. Here, where guns are more regulated, the danger of something like that happening is pretty low.

Dogs, unfortunately, remain a threat. The majority of Germans seem to have well-trained dogs, and they keep them on a leash for walks. However, we do have a few neighbors who let their dog out without a leash, including a pit bull. Last summer, I saw it chase one of the outdoor cats while his owner did nothing. I never saw that cat again, either; hopefully, the owners just moved away with the cat.

If you’re interested in bringing the cat ladder trend to America, you will probably have to build it yourself. Although there are plenty of options on Amazon in Germany, I can’t find any on the American site. This may be because cat ladders for apartments aren’t just unpopular state-side; they may not be allowed by most landlords.

If you get the all-clear, though, perhaps you can build a fancy version like the one below:

You can read more about the ladders at Meow Lifestyle. The post is about Swiss cat ladders, but the German versions are exactly the same.

Perhaps in my next post, I’ll talk about another odd aspect of German apartment life: people putting up fences around their tiny yards, and then stuffing them full of, well…stuff. One of our neighbors not only put up a fence around the tiniest space possible, they put a gazebo in it. This was yet another time I made the “oh, they must be oddballs…” assumption, only to realize they’re not the exception. They’re the rule.