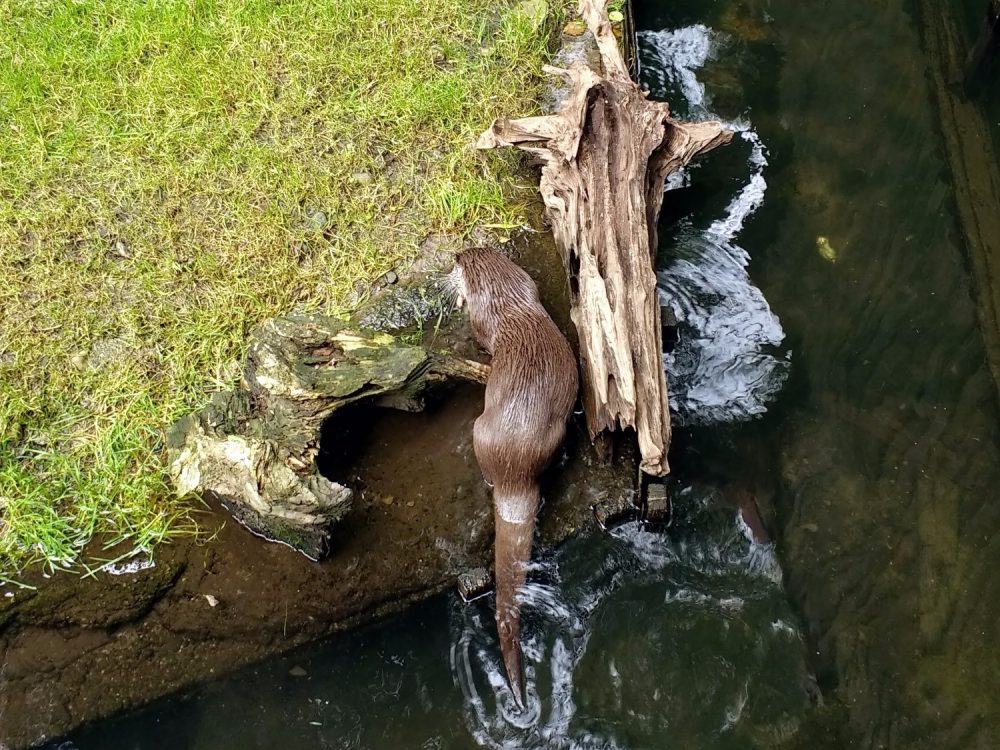 Last weekend, we went to the Hankensbüttel Otter Center with my husband’s friends. The Otter Center is a nature center dedicated to conservation and educating the public about species native to Germany.

The otters are (of course) the main attraction, but there are several other animals on display at the Otter Center, including ferrets, stoats, weasels, martens, an American mink, and even an otter hound. You can follow around one of the park employees as he goes to each enclosure to feed the animals. As the animals eat, the park employee will explain their habits and history in Germany.

Interestingly, the guide got into the enclosure with all of the animals except for the badgers. Instead of letting them run around his feet, as he did with every other critter, he was in a fenced-off area on a steep incline.

I suppose that shouldn’t be too surprising; even though they were just regular badgers, I’m sure they can be just as vicious as their honey-loving cousins. Every time the badgers tried to go up the hill, he would throw their food even further away. The badgers weren’t very good at finding their food. Often, they would miss it by a few inches or growl at each other over a single piece when there were five other scraps nearby.

I really enjoyed the stoats, but it was impossible to get a picture of them; they were constantly running around, behind, and into the hollowed-out logs in their enclosures.

The Otterzentrum was hosting a special fantasy-themed event on the day we went. It reminded of the huge Renaissance Festival in Holly, Michigan. Along with costumed actors, stalls selling handmade goods, and activities for children like wooden sword fighting, there was also a flight show featuring birds of prey.

The handlers showcased a raven, a small hawk, and a six-month-old eagle from the USA. They also allowed visitors to gently touch the birds at the end of the performance. The eagle was remarkably calm throughout the entire event, but I was even more impressed with how respectfully the huge crowd behaved; everyone, even the children, gave the eagle enough space and approached it slowly.

I had a great time at the Otterzentrum; It’s fun, educational, and they do a good job of displaying the animals while still allowing them opportunities to take respite from prying human eyes. If you’re ever in the area, I highly recommend you make time to visit.